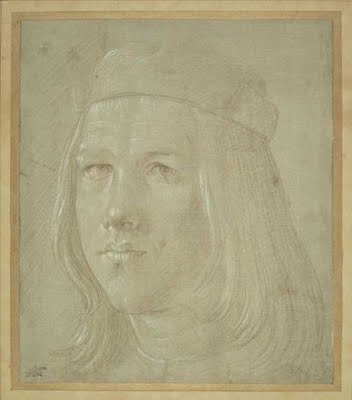 Boston’s Museum of Fine Arts is not commenting to us on rumors published in The Washington Post that it may have discovered a Leonardo da Vinci in its attic or something. But we’d like to offer our own helpful wild speculation.

Could it be the “Mona Lisa” attributed to Leonardo da Vinci that was loaned to the MFA by John R. Eyre in 1914? (This was apparently a different painting from the Portland Museum of Art's supposed "Mona Lisa." A spokeswoman there tells me, "It was not owned by John R. Eyre that we know of.") Eyre published a book “Leonardo da Vinci’s ‘Mona Lisa’” in 1915 arguing that there are two “Mona Lisa”s.

Or might the newly “discovered” “Leonardo” be a reattribution of another work in the collection? Throwing caution to the wind, we speculate about these three: 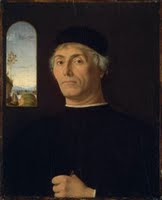 “Portrait of a Man” (pictured at left) by Andrea Solario. Because the MFA notes: “Although this portrait resembles works by other Milanese followers of Leonardo da Vinci – notice the delicate gradations of shadow and the application of paint without visible brushstrokes – it may have been painted when Solario was working in Venice.”

“Head of a Youth” (pictured at top) by Lorenzo di Credi. Because he was an associate of Leonardo da Vinci whose work was sometimes inspired by Leonardo. Could this be a case of mixing up the real thing for the follower? 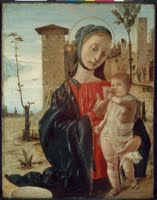 “Virgin and Child” (pictured at left) by Bramantino (Bartolomeo Suardi). Because the December 1913 “Museum of Fine Arts Bulletin” reported that it had acquired this Madonna “attributed to Bartolomeo Suardi. … Specially worthy of notice are the charm of the elegant figure, the picturesqueness of the town in the right background, the delicacy of the river running among the bluish mountains, suggesting already the landscapes of Leonardo da Vinci …”

Note that these works currently are not on view at the MFA. Could the authenticators be in some hidden MFA lab studying one of them for the da Vinci code right now?

Those are going to be hard sells as Leonardos. Let's hope it's some other as yet unknown image. It would be too bad if the MFA were to cut a few ethical corners and try to push an image as a "decide for yourself!" Leonardo to draw crowds to their new wing.