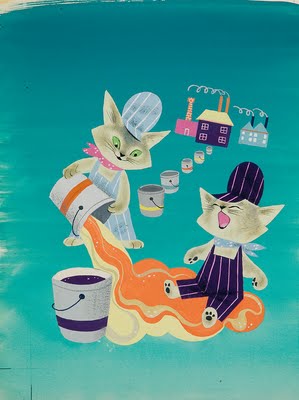 Of all the books Richard Scarry illustrated, his masterpiece may be 1963’s “I Am a Bunny” (pictured at left).

The writing by Ole Risom is straightforward and simple, the tale of Nicholas the bunny, who lives in a hollow tree, picks daffodils in spring, watches frogs in summer, leaves falling in autumn, and snow in winter. It is a basic introduction to the seasons.

But in Scarry’s gouaches and watercolors, the scenes come rivetingly alive – when tiny bunny blows dandelion seeds in the air, or huddles under a toadstool to keep dry during a rainstorm. Scarry animates the scenes through careful use of scale (that little bunny caught up in the swirling forces of nature), light and vivid color (this is before he switched to the more spare pencil and watercolor style of his later work). He captures a child’s sense of wonder at all the newness of the world. 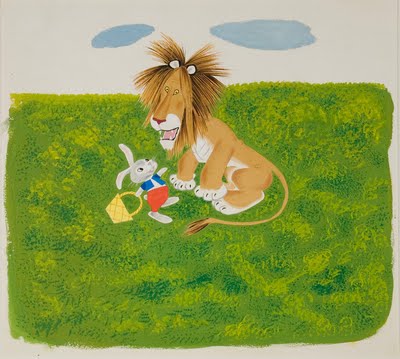 Four of Scarry’s paintings from the book are among the treasures included in “Golden Legacy: Original Art from 65 Years of Golden Books” at the Eric Carle Museum of Picture Book Art in Amherst, Massachusetts. 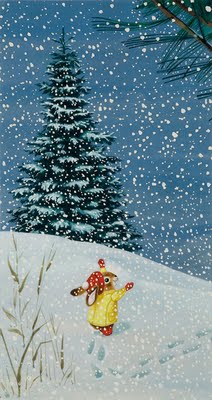 The exhibit, which was organized by the National Center for Children’s Illustrated Literature in Abeline, Texas – and which unfortunately I’ve not had a chance to see – showcases 60 original illustrations, including Alice and Martin Provensen’s gouaches for “The Color Kittens” (1949); Gustaf Tenggren’s gouaches for the “Tawny Scrawny Lion” (1952); Mary Blair’s knock out gouaches for “I Can Fly” (1951); Tibor Gergely’s gouaches and watercolors for “Tootle” (1945) and “Scuffy the Tugboat” (1946); Aurelius Battaglia’s gouaches for “Little Boy with a Big Horn” (1950); and Feodor Rojankovsky’s gouaches and watercolors for “The Three Bears” (1948). The artwork all comes from the Random House archive – disturbing evidence that the publisher claimed not just publication rights, but the original paintings as well. Also note that Tenggren’s paintings for the landmark 1942 book “The Poky Little Puppy” – said to be the best selling children’s picture book ever – are represented here only by a digital print reproduction.

Little Golden Books was launched in 1942 as a collaboration between Western Publishing and Simon & Schuster. The idea was to produce quality illustrated books at bargain prices. To keep manufacturing costs low, the books were generally printed with paperboard covers, cheaper paper, and staple bound (the staples hidden behind the trademark gold foil spine). The roster of illustrators included members of the European émigré community who had gathered in New York as World War II flared (Rojankovsky, Gergely); Disney Studios alums (Tenggren, Martin Provensen, Blair – she was the key designer of the “It’s a Small World” ride); and other originals (Leonard Weisgard, Eloise Wilkin, Richard Scarry, and Hilary Knight). 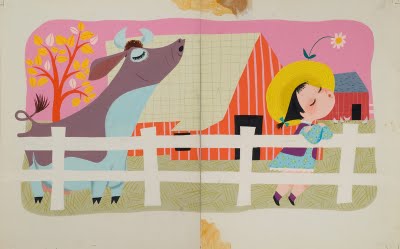 Central to the line’s success was that it was sold primarily in grocery stores, drug stores and the like – a pioneering example of the mass marketing of books. The books could be uneven, but Golden Books’ powerhouse artists produced a library of classic children’s literature. But that under sells their achievement. The best – like Scarry’s “I Am a Bunny” or Blair’s “I Can Fly” (pictured above) – are astonishing works of art, some of the finest art produced in the past century.

Previously:
"Picturing the World: The Art of Alice and Martin Provensen" at the Eric Carle Museum of Picture Book Art in 2006. 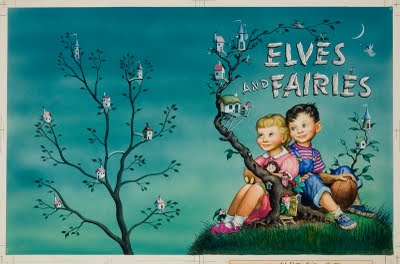 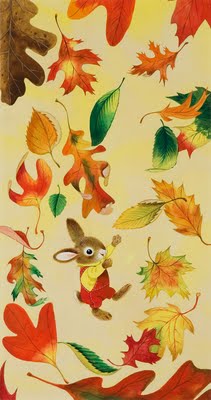 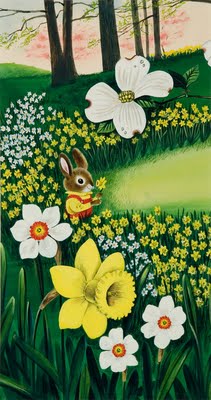 The Color Kittens was THE book I remembered from when I was a little kid. I finally found a copy and had to buy it. The illustrations, though simple, feed the imagination.

great stuff!
i had the bunny book as a kid.
it's magic to me.
the illustrations are great, but i like the text as well.