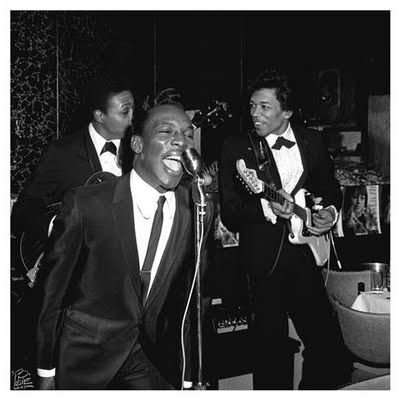 From our review of "Who Shot Rock & Roll" at the Worcester Art Museum:

It is May 1966, in the Prelude Club in Harlem, an Atlantic Records release party. Wilson Pickett, who had released “In the Midnight Hour” the year before, appears super suave, with his hair slicked up and back, his pencil moustache, and his sharkskin suit and thin tie. He leans into a microphone and lets loose.

Behind him stand two guitarists, loose and laid back in contrast to Pickett’s hot-coal intensity. In William “PoPsie” Randolph’s photo of that moment — which is part of the Worcester Art Museum’s “Selections from Who Shot Rock & Roll: A Photographic History, 1955 to the Present” — you might recognize the guitarist on the right, in a neat suit and bow tie, as Jimi Hendrix. The only signs of the later psychedelic-guitar god, aside from that familiar smile, are his pompadour, ruffled shirt, and left-handed guitar.

In June the following year, Hendrix performs at the Monterey Pop Festival in California. He is transformed, now wearing a hippie vest, rings, an Afro, and an extravagantly ruffled shirt. Seventeen-year-old Ed Caraeff, who’s seated at the edge of the stage, has never seen or heard Hendrix before. It is still two months before his debut album, "Are You Experienced," will be released in the United States. But as Hendrix sets his guitar on the stage and squirts it with lighter fluid, Caraeff stands on his chair and clicks away with his camera.

Randolph’s photo of Pickett and Hendrix balances on the tipping point between one era and the next. 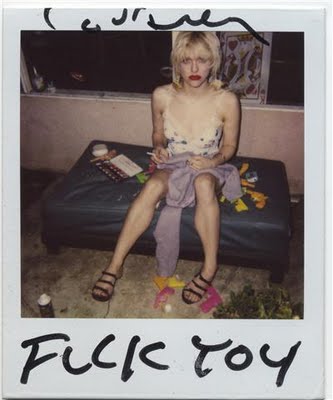 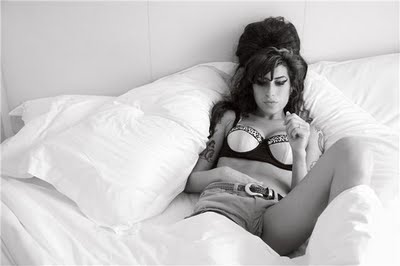