A couple years ago, Mark Wethli of Brunswick, Maine, began a new series of paintings. He started with a set of old wooden tables – 30 inches wide and 10 feet long – that Bowdoin College, where he teaches, was getting rid of. “For a long time Bowdoin used them for large dining, things like picnics,” he says. “Then they used them for many years in our sculpture program.”

Wethli was intrigued by the way the table tops resembled walls cut out of old barns, all scratched and scuffed and pocked with holes left behind by bolts that had held legs on. He began by painting the planking with washes of pale mint green, coffee and cream, and lilac. Then on top, he painted opaque black or brown crosses and pinwheels and blocks, kind meandering but particular, in a way that might call to mind hobo signs. They feel warm and human and imbued with a sense of history and nostalgia.

In February, Wethli won both the people’s choice and critics pick awards for painting in the 2009 New England Art Awards, which are organized by The New England Journal of Aesthetic Research. He spoke with us about his work when we visited his studio on Jan. 16, 2010. Below are excerpts from our chat:

“From 2001 to about a year ago, I was doing geometric abstraction, but of a regular sort – stripes, grids. … I liked what Jasper Johns said. Maps and numbers and alphabets, he chose them because they’re so neutral. That’s why I chose stripes and grids.”

The tables: “They had such great patina. … I took them not knowing what would happen to them. I just couldn’t let them go. They sat in my garage for two years.”

“The designs come from sketches. I’ll just sit over here and fiddle with ways of dividing up spaces.”

“I wanted to divide the rectangle in a way that wasn’t so regular. A lot of them have a cross. It seemed to open up a field-ground relationship.”

“I remember making a sketch – I think a wheel with spokes. It had this rectangle and I painted an oval here and I had radiating lines. And somehow the oval and the rectangle were fighting, so I got rid of them and all I had left were spokes.” 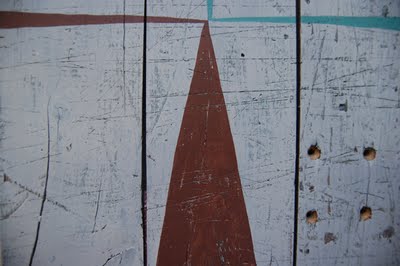 “All I’ve added is color. The scratches, the nicks, the dents, I haven’t done any of that. I wanted to let them be. … I wanted these to look like they have a lived past, not just an artistic past.”

“I love the way that farm signs are painted … very practical sign painting.”

“A thing that’s been on my mind for a long time is the windmills of Majorca, and of course Spanish windmills go back to Don Quixote.”

“I was actually partly raised on a farm. And my grandfather has a wind-driven water pump. You have to sometimes wonder if everything you do isn’t trying to reclaim what you did when you were 5.” 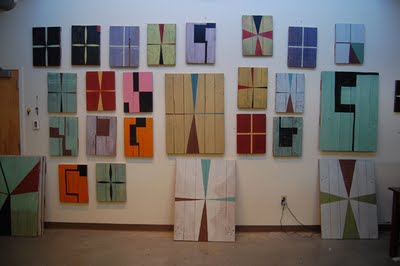 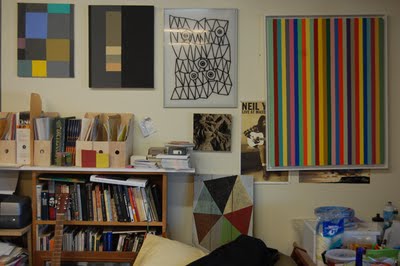 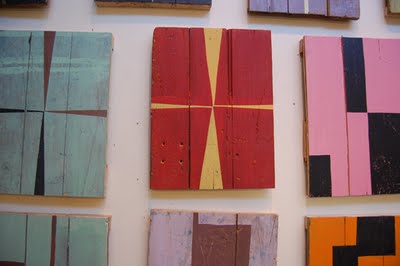 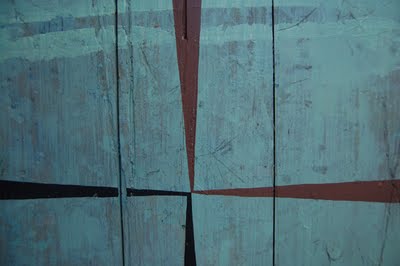 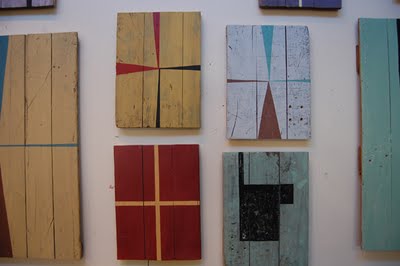