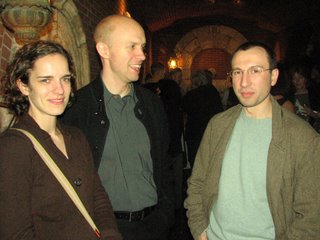 Are local artists not museum worthy? That was the blunt question I was wondering about on the train home from an art critics awards ceremony at Boston’s Gardner Museum Wednesday night.

The New England chapter of the International Association of Art Critics (AICA) presented 36 awards for best 2005 and 2006 art exhibits and events, plus a special recognition award to Boston Institute of Contemporary Art Director Jill Medvedow for leading the creation of the flashy new ICA building, which opened on the South Boston waterfront last December. (Pictured above, Julia Fethergill, Bernard Toale Gallery's Joseph Carroll and Fethergill's husband, artist Joe Zane, whooping it up at the AICA awards.)

One of the things that struck me was that of the 16 New England museum shows awarded prizes, only three featured artists who live(d) in New England. And the number of living local artists in these shows was small. (See complete list of awards at bottom.) 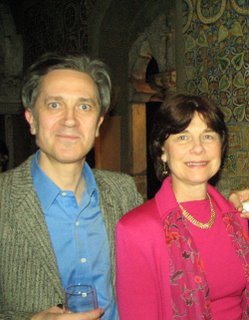 organized by Trevor Fairbrother (at left with Gardner Director Anne Hawley). It featured some 80 artists, many who lived in New England, but if you look at the 13 still alive you find Cape Codders and Mainers, some summer visitors from outside New England, and one Bostonian, Allan Crite.

“Ahistoric Occasion” at MassMoCA in North Adams, Massachusetts, took second place in this category. Among its 11 artists was a token New Englander, Peggy Diggs of Williamstown, Massachusetts.

The top prize for best architecture or design show went to “A Chain of Events: Modernist Architecture on the Outer Cape: Marcel Breuer to Charles Jencks” at the Provincetown Art Association and Museum.

Why didn’t New England critics (I’m not an AICA member) honor more museum shows by local artists? (Is three out of 16 enough?)

A first question is are there local museum shows of great living local artists? The Brooklyn Museum’s recent retrospective of Southfield, Massachusetts, painter Walton Ford, was definitely award worthy, but has no New England venue. The retrospective of Brookline’s Maria Magdalena Campos-Pons that just opened in Indianapolis isn’t scheduled to come here either.

But 2006 did offer a number of local museum exhibits by artists who reside locally – photographer Laura McPhee and painter Ambreen Butt at Boston’s Museum of Fine Arts; painter Sarah Walker at the Rose Art Museum at Brandeis in Waltham; the Foster Prize finalists exhibition at the ICA; and several shows at the Danforth Museum in Framingham and the DeCordova Museum in Lincoln.

“Wunderground” at the RISD Museum in Providence, which featured pretty much every artist from Providence’s lively underground art scene of the past decade, should have gotten some sort of award. It was a wild and wooly show, messy and imperfect certainly, but much more exciting and representing more important art developments – important nationally – than “Painting Summer” or “Ahistoric.” Or most of the other museum shows honored. 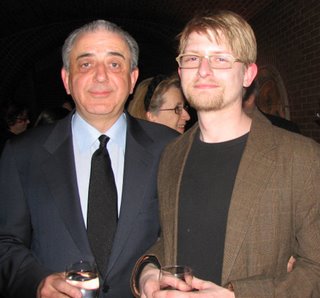 Still, the AICA’s picks are telling. Frankly, a lot of the other museum shows featuring local artists weren’t anything to go ape about. Blame the artists. Blame the curators. (Hey, blame us critics, too.) But what will we do to foster more exciting art-making and more exciting museum exhibitions of local art around here?

For comparison, here’s my list of the best local art stuff of 2006.

Photos by the Gardner's Katherine Armstrong.