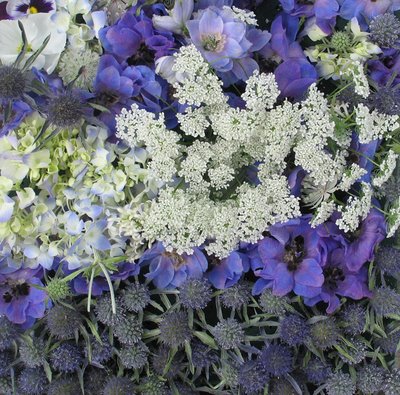 I keep thinking the Foster Prize finalists exhibit at Boston’s Institute of Contemporary Arts should be called “Searching for Signs of Intelligent Life in the Electronic Universe.”

My goofy title doesn’t cover all the generally cool, Internationalist style work included, but the primary M.O. of the four artist-finalists is data processing – sorting through all our inundating digital, virtual, mass-produced shiny 21st century stuff for glimpses of insight and humanity. Ultimately, it seems to be about seeking some sort of human connection. 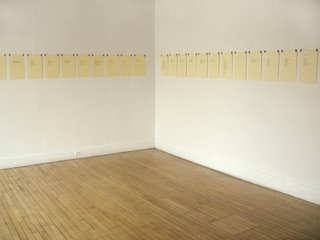 The tactic is most apparent in the work of Kelly Sherman of Cambridge, the finalist who last month won the biennial Foster Prize (formerly known as the ICA Prize), which honors “a Boston-area artist of exceptional promise” with $25,000.

But it feels too unprocessed, too much like a grad school conceptual exercise. Not to mention that computer print-outs tacked up on walls are among the most irritating art-viewing experiences. It turns the engagement with the art into homework. They might be more effective as a book (or in Found magazine), something intimate, something you could linger over. 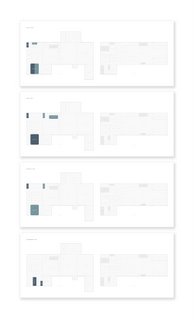 “Seating Plan” (2006) maps the complicated wedding hall seating arrangements required by divorces and remarriages. “The Family House” (2002-2006) (at left) diagrams the changing layouts of her family’s home during the stages of her parents' divorce. Sherman aims to turn these messy, highly charged emotional events into clear, rational, understandable charts and graphs. There's something to this idea.

It notes how our documents and diagrams hold our emotional histories. But her presentation has all the charm of an accountant’s spreadsheet. I wish what pleasures there are to be had here weren’t so strictly cerebral (which applies to the Foster Prize exhibit generally). But there’s something telling in her translation of emotions into cold diagrams – in her seeking ways to keep feelings at a safe distance. 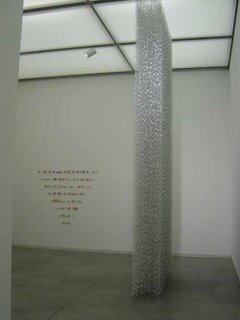 “Food Pyramid” (2006) (at left, in blurry background) is a group of tiny reproductions of containers of food her family has consumed, stuck to the wall in triangular arrangements, to document their dining. In the 1960s, Jasper Johns wrote a recipe for art: “Take an object. Do something to it. Do something else to it.” Welty’s “Food Pyramid” feels thin (like Sherman's "Wish Lists") because she accomplishes the first two steps but doesn't quite get to the third transforming phase: do something else to it.

During Welty’s “Traveling Scholars” exhibit at Boston’s Museum of Fine Arts in 2006, I was amused by her “Column B” (2006), which featured shimmering chains of silver twist ties cascading down from the ceiling. Their arrangement echoed the shape of the gallery’s white support column, pointing out the solidity of the real column and the sensitivity of her twist tie column to even the slightest breeze. And it was a wry joke besides.

Here “Wall” (2006) (shown in the two photos above) again features chains of silver twist ties dangling from the ceiling, but this time it echoes the shape of the gallery’s temporary wall. Welty’s minimalist sculptures are highly sensitive to how they’re displayed and “Wall” is diminished by being stuck in a corner. This mutes both its reference to the actual wall and its evanescence.

I wasn’t much taken by her video “Karaoke Wrong Number” (2004) (above and at left) when I saw it in the “Traveling Scholars” show, but here it works for me. It’s straightforward: Welty in a white shirt, seated in a white room, channels the voices and expressions of callers who mistakenly left messages on her answering machine – someone wishing someone a happy New Year, a guy from the Boston election department, a call about taxes. It’s a sly, funny performance. And this time around, it strikes me as a piece about the lonely, disconnected feelings we have amidst all the electronic communications that are supposed to bring us closer together.

Bostonian Jane Marsching’s “Arctic Listening Post” installation is a series of riffs on the Arctic and global warming. Global climate change is the hot art subject of the moment, but Marsching’s work here does little more than note the issue.

Inspired by accounts of 19th century explorers who passed the time by staging full-costume dramas in the Arctic, Marsching creates fake photos (one example is shown above) of clowning arctic adventurers – twisting balloons into canoes, balancing ladders on their chins, riding bicycles. It’s a lame one-liner. And her video appropriated from a government webcam of the North Pole dubbed with tinkling arctic sounds sampled from the Internet is less than the sum of its parts. 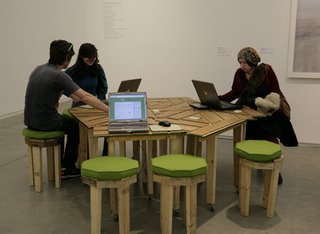 Her Climate Commons blog had potential though. Marsching and assistants built a table and stools from scraps recycled from the construction of the new ICA building. There (as show above) you can sit at laptops to read a group blog about “climate change, sustainability, and the Arctic” authored by Marsching and her gang: an Episcopal priest, a journalist, a scientist, a comedian, activists.

Climate Commons is part of the trade show style that a growing number of artists have adopted – they organize trade-show-like gatherings of new scientific discoveries or inventions rather than exhibiting their own original works. It’s another twist on database art. A prominent example was designer Bruce Mau’s “Massive Change: The Future of Global Design,” a large science-museum-type exhibition of “the latest innovations in the fields of urban design, transportation, information design” at Chicago’s Museum of Contemporary Art last fall.

I’d hoped Climate Commons would be an artist-scientist think tank, combining scientific musing and eco activism with art’s wild brainstorming. It is successful as a clearinghouse for eco news, inspirational quotes and pretty photos, but offers little original news, ideas or analysis (a weakness of many blogs). And the dozen or so contributors don’t much cross-pollinate – the point of this sort of collaboration (and the Web too). A missed opportunity. 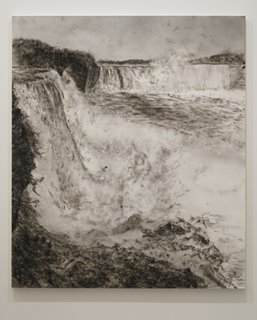 Her concern is the sublime – as in 19th century Hudson River School landscape painting (rather than data processing). She presents paintings in soot and smoke of Niagara Falls (above) and a wooded mountain. It’s a neat formal gimmick, I guess, but the paintings don’t feel like more than imitations.

But she succeeds with “Cumulonimbus” (2006) (at left, and detail at very top of this post), the best work in the Foster Prize show. She stuck dozens and dozens of fresh, fragrant pink, blue and white roses, delphinium, carnations and rhododendrons into an a recessed wall of irrigated blue foam. The blossoms are arranged into the vague shape of a thunder cloud (hence the title). It has the blast of beauty you’d expect from so many flowers so densely packed together.

What fascinates me is how it evokes a grand, posh version of the feeling that comes from wedding corsages or trickling desktop Zen fountains. It reveals a particularly middle class (tacky?) version of the sublime.