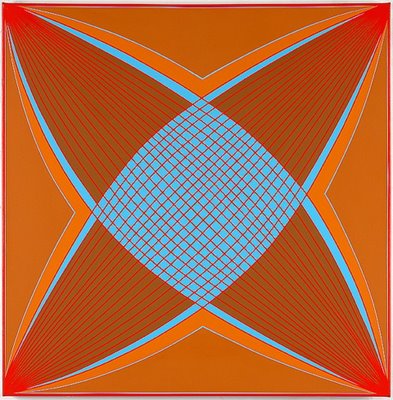 The standout is John Guthrie of Boston. Two insistent 2006 acrylic abstractions, “Siri” (at top) and “Vega” (below), feature four-pointed stars with their points nestled in the square canvases’ corners. The stars are patterned with webs of radiating crisscrossing lines, like nets or the elegant interwoven lines of a Spyrograph design. The effect is an optical illusion in which the center and the sides of the canvas seem to bow outward, as if straining to contain some force inside. 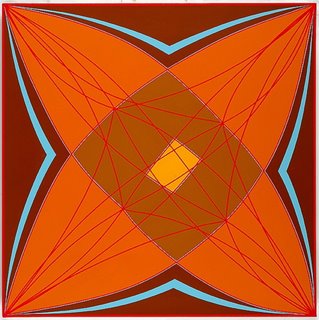 And then the colors really make the paintings pop. Guthrie contrasts hues in similar ranges (reds and golden-browns) with opposites (turquoises) of similar value wattage so that they vibrate against each other and glow like hot coals.

The flat abstract 2005 paintings that he showed at Goldman last year, which looked like diagrams for candy boxes or maybe 1980s video game screens, were also groovy. 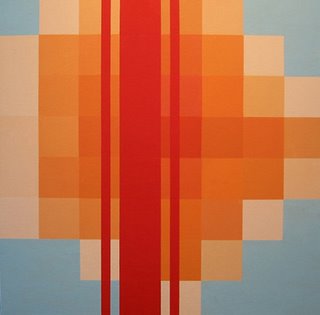 Santiago Hernandez of Boston paints flat blocky grids, targets and hot-roddy flames. My favorite is “Hibiscus” from 2006 (left), a grid of burnt orange versus baby blue overlaid by red racing stripes. His tactic seems aimed to jazz up minimalism with the pop vigor of sports car stylings, but for me they’re still a bit too sedate. 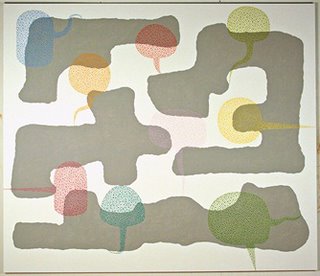 Bostonian David Kelley’s “Seems Seams” from 2007 (left) is a 7-foot-wide canvas of gray blobs (they look like blow-ups of ripped-out scraps of paper) and dotted cartoon word balloons in yellow, lavender, green, pink and blue atop a white ground. It’s jaunty fun, but kinda thin.

There are also paintings by New Yorker Carrie Moyer.