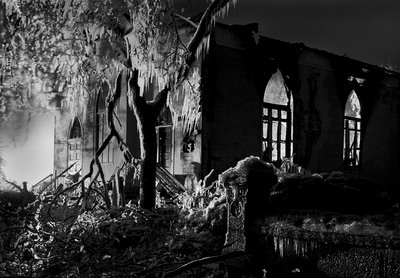 During the early morning hours of Dec. 15, a fire broke out in a four-story apartment house in downtown Gloucester, gutting the building, killing a 70-year-old resident inside, and leaving many people homeless. And then the flames spread to the neighboring Temple Ahavat Achim and completely destroyed it too.

Gloucester photographer Ernest Morin, a pal of mine who has spent a half dozen years photographing his city, was of course there as a witness. He’d gone over to check on friends who lived in the apartment building (see bottom) and nearby. Yesterday he e-mailed me this astonishing, haunting photo of the synagogue (above).

It was haunting knowing friends might still be in the [apartment] building - Terrifying at times - 16 were unaccounted for when I got there at 12:45 - I left at 1:45 to help others - so the acceleration was insanely fast - most intense fire I have ever witnessed. You couldn't stand 300 feet away for the heat - telephone pole transformers were going up like roman candles from the heat …

The Temple I shot between 230 - 4 a.m. Sunday morning 24 hrs later with a Super Speed Graphic 4x5 on a tripod - it was still on fire - fire burning behind it and the front left wall had reignited at the top - it was as desolate and haunting as it feels - It struck me hard when I first saw it - that it was "The Photo " that summed up the whole experience - I walked back home to get the speed graphic and tripod - It had already started to snow and my hands were numb trying to work the camera and film holder - I took several 2 minute exposures - the ice was from the fire hoses. The town was dead silent. Only the occasional crackle from burning timbers and icy limbs falling...The sense of loss is staggering.

The synagogue site has long been a place of worship in Gloucester. The building which burned was erected in 1828, and originally served as a Unitarian Universalist church. It was built on the site of the demolished First Parish Meeting House, which had been there since 1738.

For information on how to make donations to help the displaced residents or to help rebuild the temple click here. 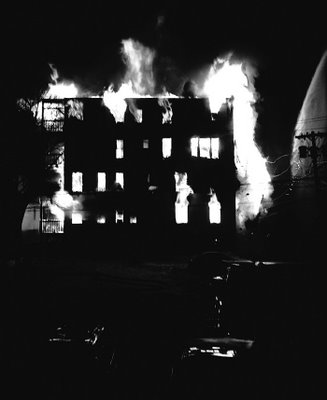