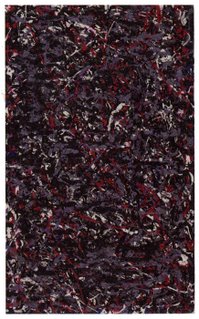 The Mystic Aquarium in Connecticut hopes to raise money by selling one of the Alex Matter “Pollocks,” which Matter recently donated to the institution, according to a report Sunday in The Day of New London, Connecticut. Pictured at left and below is the two-sided painting, dubbed “Untitled 12,” which was among the paintings shown in the "Pollock Matters" exhibit at Boston College, which closed Sunday.

The newspaper says, “Plans are to sell it and use the proceeds to help fund the next stage of the aquarium's development. [Aquarium senior vice president Peter] Glankoff estimated it could be worth anywhere between $1 million and $10 million.”

Never mind that three scientific studies (all done in Massachusetts) of selections of the 34 Pollock-style paintings that Matter says he found in his late father’s effects in 2002 have found that at least half of them contain materials not patented during Pollock’s lifetime, some of them perhaps as long as four decades after Pollock’s death.

For Matter, there is no question the paintings are Pollocks, considering the relationship between his parents and the artist.

“If you look at them, anyone who knows anything about Pollocks will say these are Pollocks,” he said. 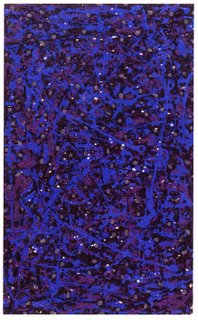 He admitted he was initially frustrated over the controversy, “but I don't read that stuff anymore. People have their own agendas.”

How much the question of authenticity could affect the sale price is unclear. But that has not dampened the aquarium's enthusiasm.

“When word reaches modern-art aficionados that we're looking for a buyer, there will be great interest in it,” Glankoff said. “They are not making any more of these.” …

Last week Matter told Glankoff that if the donation of the first painting benefits the aquarium, he plans to donate additional paintings to the aquarium and other organizations.

Related:Pictured: “Untitled No. 12,” 13 7/16 x 8 3/8 inches. Recto is at top and verso is below. The painting is reproduced here in conformity with fair use principles.