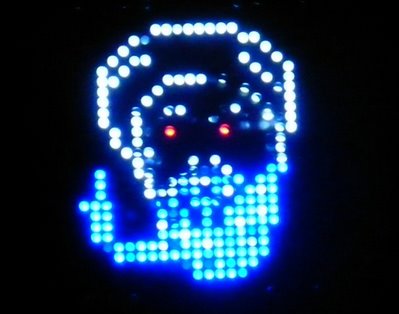 To commemorate the first anniversary of Boston’s Mooninite invasion, anonymous (so far) someone or someones have hung LED signs on buildings around greater Boston, the folks at the Make magazine blog are reporting. The Lite-Brite-style signs apparently include images of President Bush, Jesus and Osama bin Laden (above), with bits that recall the Mooninites flipping us the bird. Oh, those provocative arty rascals. The new LED signs seem to have been put up at some of the sites where the Mooninite LED signs were found last year: Fenway Park, a storefront in Harvard Square and some Boston University building. Make has pictures, and the signs don’t seem to be on any public infrastructure, which was the key cause of the government’s, uh, overwhelming response to the Mooninite thing a year ago.