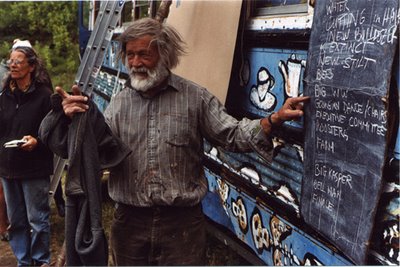 Bread and Puppet founder Peter Schumann (above) discusses his new pageant, “The Divine Reality Comedy,” which plays through Sunday at the Boston Center for the Arts. These are edited excerpts from a Jan. 23 conversation I had with him. (Read my full introduction here.)

NEJAR: The show seems to go from shopping and commercialism to Guantanamo and to torture. Those are the two main themes of the show.

Schumann: It ends up with that as if Guantanamo is a logical sequence to the prevailing commercial attitude. I see the cruelty of this society is coming directly from the wonderful philosophy of capitalism, it’s directly related. This benevolent freedom and democracy are directly torturous. What are we importing into Iraq? Torture and destruction on the largest possible scale. And we call it freedom and democracy. And with what means? With the means of our bombardments and so forth, and invasions of Fallujah and other cities, but also with the prisons in which thousands of people are subjected to inhumane treatment. And we find that standard procedure. That’s how it goes. ...

What I’m saying simply, as the show shows it, is that Guantanamo is the logical result of the prevailing consumerism and capitalism in its shape as it is right now. It’s not illogical, it’s not an aberration, it’s a totally logical result of that. So I’m saying the School of the Americas or Abu Ghraib or Guantanamo are not ‘rotten apples,’ as Bush called them, but are directly philosophically correct, pin-pointable climaxes of the system. The cruelty of the capitalist system, which is either cruelty within the range of how it provides for people in that it creates poverty and gigantic riches at the same time. Or it’s the direct cruelty of bombardments and creating slavery. 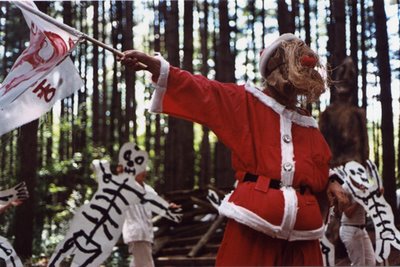 We are working with a lot of people who ... every year we have dozens and dozens of people who are slaves to the system and don’t know how to get out of it in that they come from universities. They just finished their studies and then they are committed for a couple of dozen of years to pay back their slavery loans. For having been allowed to study within the system. They suffer from this. And they are not free, not at all. They have to go into the system and prolong the system and participate in it in order to pay these goddamn loans. Which aren’t justifiable whatsoever. In that education shouldn’t be that kind of a luxury thing that you have to pay for. Not in a free society, or so called free society. …

A key scene has performers moving about small doll-like puppets as a narrator reads an account of a US government interrogation and one performer strikes the table the puppets are on with a hammer.

So we have papier-mâché figures from very small, six inches, to eight feet tall in this show. They are the sufferers. And with that suffering of these pieces of sculpture you get much closer to the real suffering than with what you would get if an actor fakes that kind of thing. I think that painting and sculpture are much more adequate means of showing such extremes than the art of acting. The art of acting suffers from its psychological limitations of always imitating something. And then you get the gist of that and you get turned off. At least that happens to me. Maybe that doesn’t happen to everybody, apparently not. That I feel is the logical reaction to it. Whereas in painting or for that sake literature you don’t have that effect because it’s distant enough that there’s enough for your brain to do the imagining yourself, you don’t need the actual imitation of the bedroom scene to feel for love and closeness and so on. It’s not necessary. 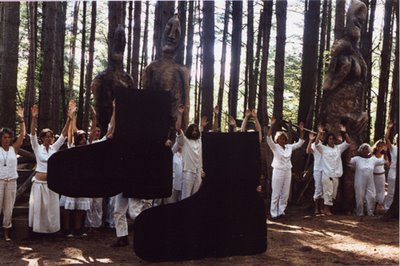 A subsequent scene has masked and costumed performers slowly, symbolically acting out torture.

Right, but it’s not striking the character, it’s striking a piece of sculpture in slow motion. And that is a transformation of the actual act of doing that to somebody. It’s not the same thing. It’s clean. It’s something that speaks and yet doesn’t force you into a particular image. You’re open. The hammer is not a torture instrument, the hammer is something we all know, it’s a household instrument. And in our play the hammer is also not used as a torture instrument, but just as something that shows you a form of brutality and a tool of brutality in a very ordinary way by slamming on the table. The hammer is a quite convincing thing there. Besides at the time the hammer is used there has been talk in these quotes from actual interrogation papers of a prisoner being bolted to the floor. So the bolting to the floor and the sound of the hammer on the table are closely related, if not the same.

Pictured: A version of Bread and Puppet’s “The Divine Reality Comedy” as it was performed in Glover, Vermont, last summer. Photos copyright The New England Journal of Aesthetic Research.