Jeremy Deller in ICA’s “The World as a Stage” 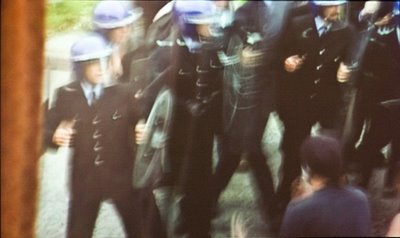 The Institute of Contemporary Art’s new exhibit “The World as a Stage,” as I wrote in my review this week,

has one terrific piece: London artist and 2004 Turner Prize winner Jeremy Deller’s infrequently seen 2001 video “The Battle of Orgreave," which documents his large-scale re-enactment of an infamous clash during a British miners’ strike. The re-enactment is part community therapy, part exorcism; the resulting video is tense and visceral and heartbreaking.

It’s also an hour long. I know it’s difficult to devote that much time to a single video in a small uncomfortable museum gallery, but here’s how to do it: bring a pillow, sneak in popcorn, and skip the rest of the show. ...

Several thousand striking miners showed up at Orgreave in South Yorkshire one June day in 1984 to stop trucks from bringing coal from a processing plant there to steel factories. Thousands of police officers came to stop the miners. It turned into a brawl. The miners were routed; eventually they lost the strike, as well. The mines closed, and that devastated many of the communities around them. Watching the re-enactment with knowledge of the outcome, it’s still hard not to hope that the miners will win, that somehow history can be rerouted, that it all might go better for them this time around.

I went to a symposium at MassMoca on their history show, Ahistoric Occassion. This video was in the show and Jeremy was on the panel. Fascinating.