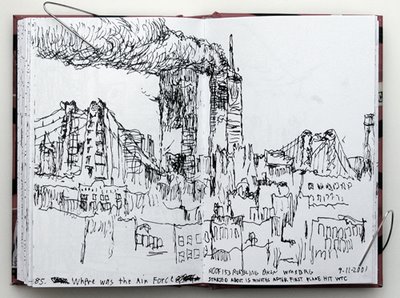 Earlier this week I posted a link to my review of Gary Panter’s exhibition “Daydream Trap” at the Aldrich Contemporary Art Museum and excerpts from a public talk he gave at RISD in 2006. Below are excerpts from my interview of Panter at his Brooklyn home on April 11, 2008:Pictured: Gary Panter, “Where Was the Air Force,” 2001 from “Satiroplastic” sketchbook, 1999-2001, courtesy of the artist.

Great Wisdom. It's amazing that a man who influenced so many of us in the 80's with Pee Wee is still doing so now that I'm in my Thirties. Gary Panter is King!!
Like Kirby but different.