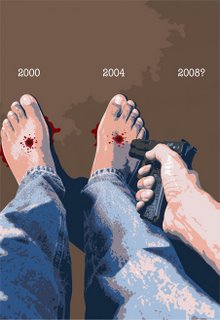 Over the summer I wrote about Boston graphic designer Chaz Maviyane-Davies’ broadsides about in his native Zimbabwe – and in particular the turmoil after disputed elections there in March. With the U.S. presidential election approaching, he has joined a group of graphic designers in “30 Reasons,” a 30-day e-mail and internet campaign to rustle up votes for Barack Obama. The project features a new poster by a different artist each day between Oct. 5 and the November election. Maviyane-Davies went first. The message of his poster (pictured here) ain’t subtle.

P.S. If you know of pro-McCain-Palin art by New England artists, please let me know.