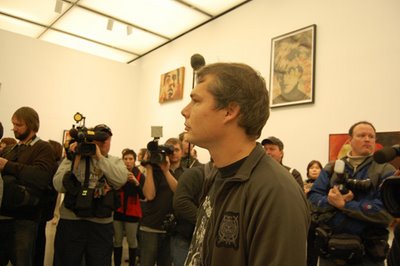 “Shepard is very pleased to have the Boston case behind him and return his attention to making art,” Fairey spokesman Jay Strell writes. “As an artist with a traveling exhibition surveying two decades of his work, which includes many examples of public art and the iconic Obama ‘Hope’ poster, Shepard believes that it is important for artists everywhere to have access public spaces to display their work, but do so in a respectful manner. … Shepard looks forward to continuing to bring his art to people everywhere whether it is inside a museum or in publicly available spaces.”

The Los Angeles artist, who is the subject of a major retrospective at Boston’s Institute of Contemporary Art, pleaded guilty to a charge of defacing property by postering an electrical box – while being witnessed by Boston police – in Brighton in 2000, and two counts of wanton destruction of property for postering a condo on Massachusetts Avenue in Boston’s Back Bay and putting a sticker on a traffic sign on Atlantic Avenue in Boston’s Fort Point neighborhood in 2009.

Fairey was sentenced to two years probation and ordered to pay $2,000 to a Boston-based graffiti clean-up service. He also must notify the Department of Probation in advance when he plans to visit Suffolk County, and while in Suffolk County must not possess any stickers, posters, wheat paste or other graffiti materials “except in connection with legal and authorized art installations,” Wark said.

Wark said Fairey agreed to make a public statement to the media today – though this was not specifically ordered by the judge – apologizing to Boston residents and promoting respect for private property.

“It’s the appropriate resolution to the case,” Wark said, explaining that it takes into account the facts of the matter and the property owners. “Private property is private and it should be up to the owners what to do with it. At the same time, the graffiti exemplars were not egregious or hateful in their content.” He added, “This is not your average tagging case.”

The ICA immediately sent out a press release saying: "As reported in the news media, Shepard Fairey's court case involving the Boston Police came to a close today. His legal battles in Boston over, Fairey can finally celebrate the success of his first museum exhibition currently on view at the Institute of Contemporary Art. On July 31, Fairey returns to the ICA for Obey Experiment REDUX, a spectacular evening of art and music on the Boston waterfront."

The ICA announcement included this statement from ICA Director Jill Medvedow: "We are thrilled to learn that Shepard Fairey's legal issues with the Boston Police have been resolved. With this matter now behind him, the focus of the conversation can return to where it belongs: on Fairey's artistic accomplishments, his outstanding exhibition at the ICA, and the meaningful contributions he has made to our visual and political culture.”

Pictured above: Fairey photographed by The New England Journal of Aesthetic Research at the press preview for his ICA show in February, and a mug shot from his Feb. 6, 2009, arrest by Boston police.