DeCordova given $1M for sculpture park 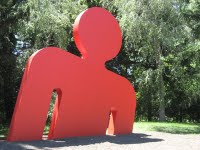 The DeCordova Sculpture Park + Museum in Lincoln just announced that it has received a $1 million donation to fund the creation of the Hamilton James Sculpture Park Acquisition Fund. This follows on a separate $1 million dollar gift to endow the park in May, and is another sign of the ambition of DeCordova, under director Dennis Kois, to become a major national player in sculpture. Kois, who joined the museum in June 2008, has identified sculpture as niche the museum could fill both locally and nationally because, in part, there are still few major institutional players devoted to sculpture across the country. That DeCordova has been able to secure these major gifts at a time of global financial crisis is particularly extraordinary.

“With this generous gift, DeCordova will be able to bring in stellar works by an international roster of artists to help us meet our goal of making DeCordova one of the pre-eminent sculpture parks in the country within a decade,” Kois said in the museum’s announcement.

The gift announced today was donated by Tony James in honor of his late father Hamilton R. James, a former DeCordova trustee, and includes $1 million now plus a potential future gift of $500,000 if the museum is able to raise an additional $1 million over the next three years for the acquisition or commission of major works for DeCordova’s sculpture park.