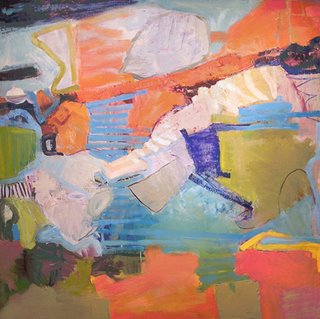 Danvers artist Anthony Falcetta’s bright, lush abstract paintings at Judi Rotenberg Gallery look like something you’d see if you gazed straight down from the window of a jetliner. This aerial landscape effect is most apparent in the canvas pictured below, “Yellow Open State” (a reference to a Red House Painters song, I do believe), which has squarish passages of green, gold and brown that look like plots of land seen from a high angle and a blue strip along the top that reads as a narrow band of sky. 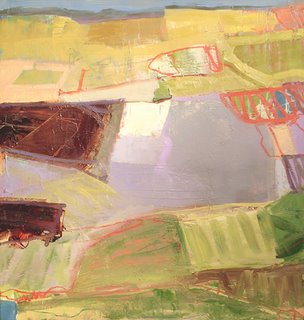 Falcetta, according to the gallery, fashions himself as a modern day abstract expressionist. “I try to look at things with active eyes and a blank mind; a finished painting is the result of that kind of looking, plus a physically direct painting process,” Falcetta writes in an artist statement. “I don’t design ahead of time and follow a plan; it’s relentless revision, thoroughly subjective and guided by emotion and gut instinct…” 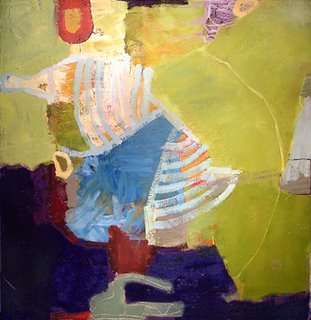 The resulting oil paintings are animated and improvisational, with lots of bravura brushwork. Falcetta’s work comes out of the tradition of de Kooning and Kline, but with a hotter palette than those guys. The most direct correspondences are to Richard Diebenkorn’s paintings. (His website also features mixed media constructions that appear inspired by early Rauschenberg and Johns.) Falcetta alternates between big open passages of bright turquoise, oranges, golds, forest greens; stripes the width of his brushes; scratching with the end of his brushes; and scrawled oil stick lines. He beautifully layers his paint, putting on some thick and opaque, some thin and brushy, some dragged across the surface so that it picks up the rough texture of the paint underneath. 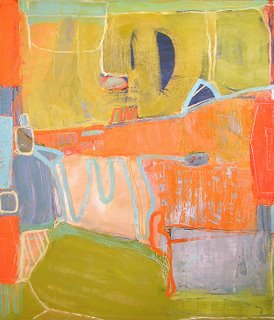 This is old school action painting by an obviously talented artist, but it feels like something’s missing. Falcetta seems like a guy still finding his style who’s skilled enough to pull off a jazzy reincarnation of the swaggering Cedar Tavern-style paint-slinging that he emulates. That’s an achievement. But I hope he’ll find ways to speak more personally, and more of today.