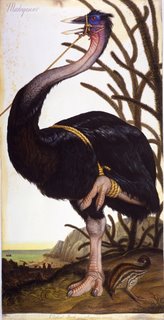 In John James Audubon’s 1833 watercolor of a golden eagle for his landmark natural history volumes “The Birds of America,” the brown raptor flaps into the sky above icy mountain peaks with a rabbit pinched between its talons. In the background, a tiny hunter (believed to be Audubon’s self-portrait) shimmies across a log spanning an icy ravine, with his rifle and a dead eagle slung on his back. It’s a little detail that points at the violence behind Audubon’s achievement.

It’s that backstory, that tale of conquest and colonization and accumulated injuries against nature, that is at the heart of Walton Ford’s allegories. “Tigers of Wrath,” at the Brooklyn Museum through Jan. 28, assembles more than 50 watercolors by the Southfield, Massachusetts, artist. He paints in a style purposely reminiscent of Audubon’s 19th century work, complete with fake foxing to make the pieces appear a century and a half old. But here the antique look – as in Kara Walker’s adoption of 19th century cut paper silhouettes as her signature medium – is deployed to dissect the past, to suggest that karma is coming for old and ongoing sins. 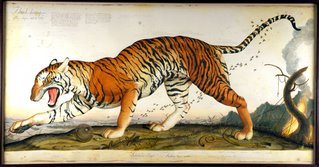 Ford’s 10-foot-wide painting “Thanh Hoang” (1997), at left, depicts a tiger hovering over a glass ball atop a hill. Penciled words indicate the fleeting thoughts of the cat – chasing, sleepless, hungry, seeking revenge. It’s inspired by an old tale of a tiger chasing a horseman who stole her cub, but twice eluded her by tossing out glass balls in which she sees her tiny reflection and is tricked into thinking it’s her cub trapped inside. “And so, deceived by the zeal of her own dutifulness, she loses both her revenge and her baby,” text jotted on the painting explains. 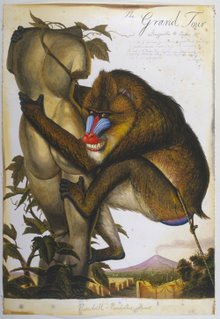 Ford paintings – in watercolor, gouache, ink and pencil on paper – catalogue the heartless cruelty people inflict on animals. One artwork depicts an okapi of the Congo forest stretching out its purple tongue to lick honey that is the bait for a trap that will simultaneously photograph and shoot the animal in the face. Other works point to the disastrous results of our carelessness and shortsightedness. In “The Starling” (2002), a spoonbill, hornbill, woodpecker and owl bring food in supplication to a giant starling, the king of the invasive species (introduced to North America as part of a cockamamie scheme to bring to the United States all the birds mentioned in the works of Shakespeare) threatening to wipe out the natives. Some like “The Grand Tour” (2000), above, speak of our cluelessness. Here Ford imagines a mandrill captured in Africa and taken to London via Naples. At top, he jots painter Oskar Kokoschka’s complaint, when sketching in the London Zoo, of a “big, solitary mandrill, who profoundly detested me , although I always brought him a banana in order to make myself agreeable.” 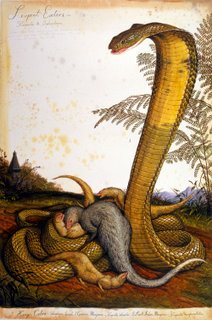 And then there are scenes that seem to be omens of our coming comeuppance. In “Sanctuary” (1999), Gorillas dig up and drag off the remains of the great naturalist Carl Akeley (1864-1926) of New York’s American Museum of Natural History, called the father of modern taxidermy and founder of the world’s first gorilla preserve. He had himself buried in the side of a volcano where the last mountain gorillas survive. In “Novaya Zemlya Still Life 1596” (2006), a polar bear has ravaged European explorers come searching for the northwest passage and only their clothes and junk remain. 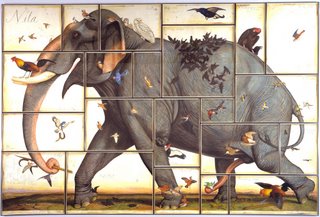 At times Ford’s paintings can feel silly and tacky, the morals-of-the-story forced, the compositions recalling those famous paintings of dogs playing poker (not that those paintings aren’t awesome American icons, but that’s another story). His prints – at least based on the examples in the DeCordova Museum’s just closed exhibition “Going Ape” – feel stilted and dried up, lacking the vividness and vitality of his watercolors. And often the stories Ford references are obscure and he offers few clues to decipher them. “Astoria 1812” (2006) depicts a grizzly bear eyeing a man’s bloody, bare feet sticking out the end of a hollow log. Without the wall text, who’d know that it illustrates the adventure of an 18-year-old Irish immigrant, working for tycoon John Jacob Astor’s Pacific Fur Company, who was sleeping in a hollow log when a bear tried to root him out? He sprung out, hollered, threatened the bear with a stick and escaped up a tree. 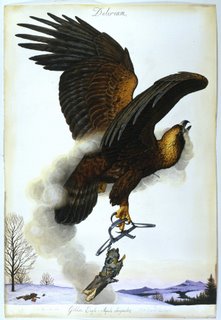 Many contemporary realists fudge their lack of draftsmanship with a soft focus or diversionary razzmatazz (see the Iraq documentary drawings by New York-based Steve Mumford, a Boston-native and Museum School alum). But Ford actually has realist chops. At his best, he uses his astonishing technique to sweep you up in his sad, disconcerting narratives.

In “Delirium” (2004), above, a golden eagle choking up gray smoke flaps into the air above a snowy hilltop. Its talon is caught in a trap that it drags up with it. The painting is meant to show the ugly truth behind Audubon’s eagle painting. It conflates a number of incidents (see following post): a hunter who accidentally caught the eagle in a fox trap, Audubon’s failed attempts to smokily asphyxiate the bird once he purchased it, and suffering a stroke himself after he finished drawing it. Like an avenging spirit, Ford imagines Audubon as a tiny hunter in the background, stricken, collapsed into the snow at the top of a wintry hill.