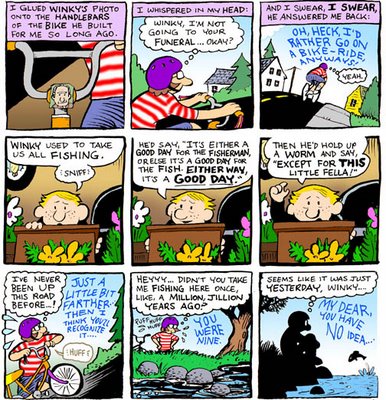 It’s rare to find mainstream newspaper comic strips with as much emotional honesty as Marek Bennett’s “Breakfast at Mimi’s,” the Henniker, New Hampshire, cartoonist’s new book collecting the first two and a half years of his weekly newspaper strips “Mimi’s Doughnuts.” The comics, which have appeared in the Keene (NH) Sentinel since October 2003 and subsequently in Vermont’s Valley News, Rutland Herald, Brattelboro Commons, tell of Shayna and her two step-siblings growing up in a loving, hardworking family after her parents divorced. The story begins with her mom and step-dad buying a doughnut shop vaguely set in a fictionalized blend of several New Hampshire towns (Claremont, Walpole, Marlow, Henniker). The shop serves as a major setting for the strip, but Bennett smartly has it play a backseat to his sweet, melancholy, funny tales.

Bennett’s drawing is good, a sort of loose newspaper strip traditional. But he shines with his deft command of narrative, knowing how to pack a lot of story into a tight space, knowing the right moment to end a tale. Readers may recognize some of the whimsy of Bill Watterson’s “Calvin and Hobbes” and the gritty life of Lynda Barry, with a dollop of familiar newspaper strip schmaltz.

When Shayna inevitably runs into problems dying her hair, the narrator says: “One thing about hair dye though: / You can’t make it better just by cutting it off. / In fact, it just gets worse… and worse ….” Her kid brother and sister watch. “Think she’s going to shave it?” “Let’s go hide all the hats!”

The stories are inspired by Bennnett’s wife Denise’s childhood in Claremont, and revolve around scary dogs, head lice, scary dark cellars, adolescent dating, divorce, a grandfather dying, shoplifting, domestic abuse, and New England woodland disappearing under expanding housing and shopping developments. Listing his subjects off like this can make it sound like a cheesy after-school special, which the strip is not. “Breakfast at Mimi’s” is simultaneously lighter, funnier and more pointed than that.

Bennett’s balance of emotional truth and schmaltzy humor is evident when Shayna’s mostly absent father shows up to take her out for an awkward dinner. “Look, Shayna – I know I haven’t been the world’s best dad. Been kinda … not always there for ya …,” her father says. “But you know that. / Anyhow, now you’re turning fourteen. And I want ya to know that I’m proud of ya. / and I’m sorry too. For the dad thing.” He pauses, before adding, “And I wanna make up for all these lost years.” Shayna replies with the final line of the strip, “I’m turning fifteen, you know.” 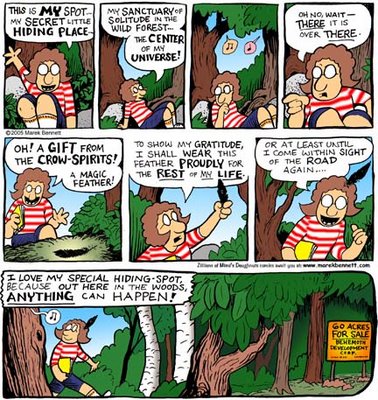