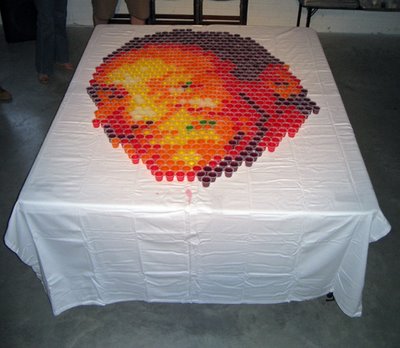 Andrew Salomone of Dover, New Hampshire, celebrated Bill Cosby’s 72nd birthday Sunday by creating a likeness of the comedian and longtime Jell-O pitchman out of 746 Jell-O shots at Buoy Gallery in Kittery, Maine.

“I'm always sort of interested to see what happens when I create a physical manifestation of some of the associations that we all have in our heads,” Salomone tells The New England Journal of Aesthetic Research. “So for the ‘Jell-O Head’ project, I only became interested in actually making the work when I realized that Buoy Gallery was going to be empty on Bill Cosby's birthday and that the project would function as a social event.” 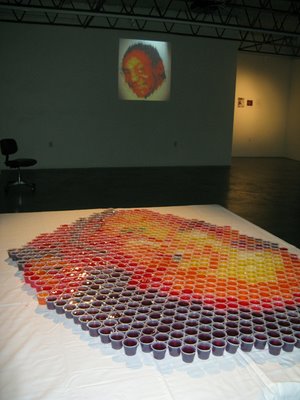 It’s a goof, but a lovely goof. And it is one more wacky result of artists’ fascination with pixel-built images in our ever more digital age. Another recent example: the Obama portrait that elementary students in Westfield, Massachusetts, made from 2,420 dominoes.

“In the end the project came out better than I could have imagined because of the way that the participants in the show just spontaneously started moving the Jell-O shots around and making their own imagery out of the Jell-O shots,” Salomone writes. You can see an examples in the photos here and the video slideshow. 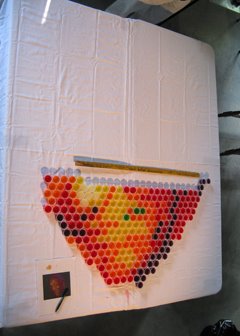 “It was sort of amazing to watch it happen because there was no discussion or anything. I was just expecting people to start timidly taking a few shots but instead several people made their own alterations that completely changed the image throughout the night. It was really dramatic visually because the image of the portrait was projected on the wall of the gallery, so the table cloth looked liked like a canvas and the Jell-O shots became a sort of morphing painting. The people who came to the show basically made the project better than anything I could hope to do.” 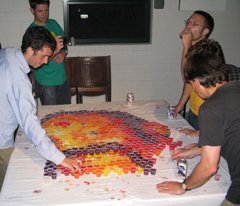 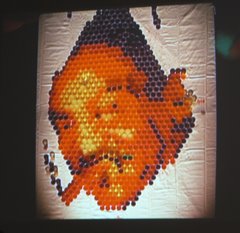 And this may not even be Salomone most awesome recent project. Not long ago, he embroidered a white sweater with all of Amy Winehouse’s tattoos in all the anatomically right places. (At least this seems to be a real sweater; I’ve not seen it in person.) It’s wicked and funny and endearing all at once. He says he was inspired to make it because he heard that Winehouse was having health problems and yet was always wearing skimpy clothing, seemingly to show off her tattoos. 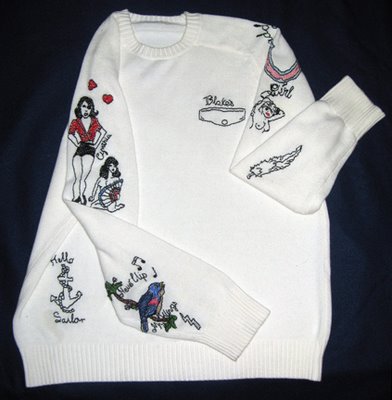 “I realized that if someone were to make her a sweater that displayed her tattoos to the world without exposing her to the elements," Salmone writes at his blog, "then maybe some of her health problems would go away. At the very least it might prevent her from getting a cold.”

“It only makes sense that Amy should have this sweater,” he says. “If anyone has any idea how to make that happen please let me know.” 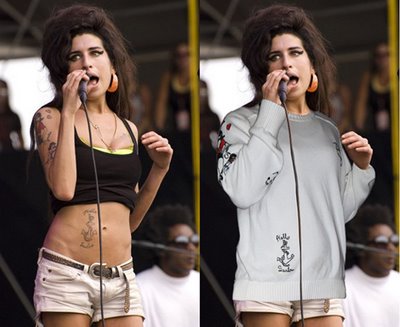