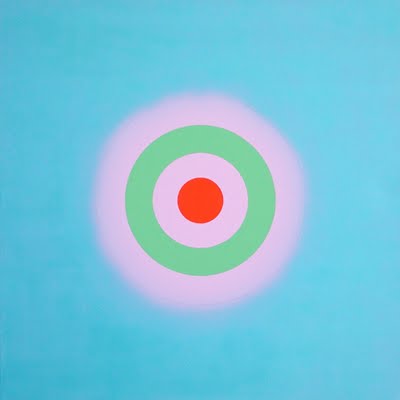 "I do not like representation in painting.” – Kenneth Noland

Kenneth Noland, a pioneering Color Field painter of the 1960s, who was known for his signature paintings of targets, chevrons and stripes, died today at his home in Port Clyde, Maine, The New York Times has reported.

Pictured from top to bottom: Kenneth Noland’s painting “Mysteries: Afloat” 2000. And Noland painting circa 1968 (unidentified photographer, from the collection of the Smithsonian’s Archives of American Art). 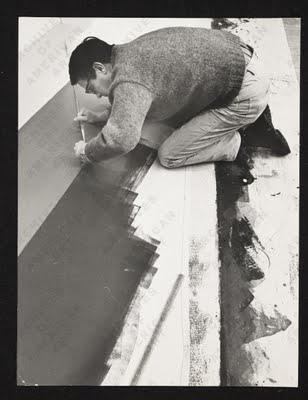 Sorry he died, that anyone dies, but then millions do everyday. And he had a far better life than pretty much all of them, with little to contribute. If academic art had not been rebuilt through Black Mountain and Josef Albers, who was a nobody in Europe beyond simple design theory, he never would have been known if judged by early modern standards. Or the standards, sadly lacking now, of any other dynamic age of creative art.

Basically, its Alber's silly squares, truly the first pantone charts and nothing else, not art at all, meets Rothko's fuzzy edges, minus any attempt at spirituality. "Minimalism" is truly sub-minimalism, it is taking one facet of art's brilliant diamond, and ignores all the rest. What he and the rest of his art school trained, literally limited notions of art did was seperate A function of art that was always there, and claimed it to be new. But real artists created layers of relationships, and it is this relationship structure that creates the life force, the glowing color, the rhythmic structure, the melodic line as one piece of complex, passionate music.

Matisse had taken art as minimal as it could go long before, and then came back from the edge. These wannabe's simply kept on going in that direction, taking one slice of Cezanne's apple and claiming it to be art, and things have never having understood art complexity through mastering the fundamentals first, takes too much time and effort, and been truly boring ever since.

Its easy to do this, it is illustrations of academic theroy, when true creative art starts with theory as a foundation, and builds towards a complex life force, the theory embracing othere along the way and becoming organic, with no trace of it left by the end. It is but a literal starting Point, the work, a reflection of the world, grown outward into a laarge geometric skeleton, and layered in depth and resolving the contradicions we see, but truly are not.

Art is always poetic and musical, this is just silent worship of mans limited mind, no discovery, to exploration, no passion. It is far from Delaunay's color rhytms, it is dead air. What do they teach in art school these days? Ignorant, and they wonder why people dont go to contempt museums anymore. Its simplistic theory for academic hacks and wordsmitsh to create isllusion in essays wiht, for career, for marketing, for creating a signature to sell, rather than works of art that vary and explore. Its retarded. Literally.

At least Stella went on to break geometric form, and his sculptures of painted panels of french curves are kinda intersting, more going on. Here, you gotta be a belly button contemplator, of simple minded to enjoy. When Cezanne said art is the cone, the sphere, and the cube, he didnt mean take just one, and smash it down into a pancake, and fill it in like a coloring book.

Art is always musical and poetic, NEVER prosaic and academic, theroies are for psot mortems, for simple minded critics, nto artist, thsi is where things went wrong. When young wannabes started looking at critics career building essays, instead of art itself. FEEL it, or it is nothing. Ideas are for fools, they are but tools. As are artistes. The artist means nothing, its his work that must speak. And this is silent,