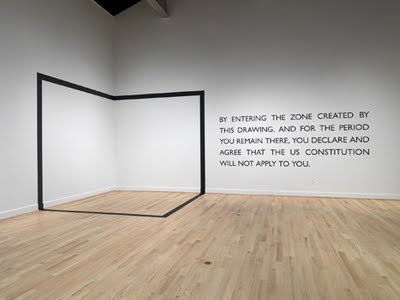 From my review of "Carey Young: Uncertain Contracts" at the RISD Museum in Providence:

You could be forgiven if you sometimes thought that corporations are the root of what's wrong with the United States. Enron, AIG, Blackwater, Monsanto. Need I go on? But one of the curious facts about our country is how corporations were central to our founding. We praise the Pilgrims' 1620 pledge to "combine ourselves together into a civil body politic" in their "Mayflower Compact" as a model for our Constitution. But it is also a corporate contract by people pledged to founding a money-making colony for their financial backers in Europe.

I found myself mulling these notions during a visit to Carey Young's "Uncertain Contracts" at the RISD Museum (224 Benefit Street, Providence, through April 18). The Zambia-born, London-based artist's pieces here adopt the trappings of contracts as a variation on the basic format of conceptual art, from Fluxus performance scripts to Sol Lewitt's instructions for making drawings. Young recognizes that these scripts and instructions are a sort of contract, and then bends the format toward critiques of our nation of laws and business agreements.