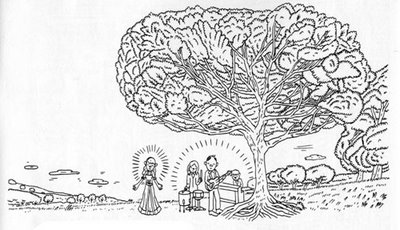 One of the most dazzling artists to emerge from Massachusetts in the past decade is Ron Rege Jr. And he emerged right the hell out of here. But he returns as the percussionist and artist for the sweetiepie band Lavender Diamond, which plays at Boston’s Museum of Fine Arts tomorrow.

Rege grew up in Quincy and Plymouth, studied at MassArt, and from 1988 to ’98 lived in Mission Hill and Cambridge, which is when we became friendly. He was part of the rocking and widely influential Boston-Providence art-comics scene of the past decade, whose most well known (art world) denizens are Fort Thunder and Paper Rad. 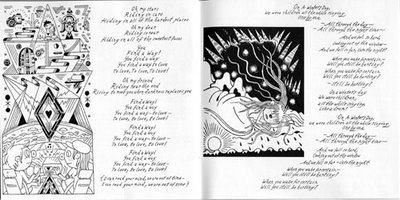 Inspired by E.C. Segar’s “Popeye,” Rege plumbed the abstractions of the cartoon language – particularly all the floating geegaws – to create a psychedelic Cute Brut style that shimmers with longing and worry and awe. He shifts back and forth between autobiographical tales and unnerving apocalyptic fantasies, like his book “Skibbber Bee-Bye,” which was published by Tom Devlin’s now-defunct Highwater Books in Cambridge in 2000 (Devlin also published my work) and has since been republished by Montreal’s Drawn & Quarterly. 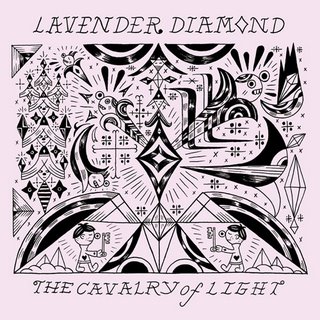 Chris Ware blurbed it: “Ron Rege Jr. is probably the greatest 'new cartoonist' (whatever that is) I can think of. In the tradition of ‘pioneers’ like Herriman, Sterrett, McCay, et al, in that he has wholly reinvented the comic strip language to suit his own idiosyncratic vision; his apparently simple yet beautifully complex little line drawings seem to spring from the very essence of ‘the form.’” 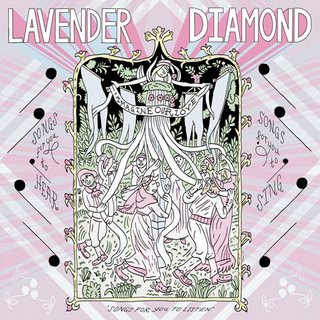 Rege decamped to the San Francisco Bay Area in 1998, but returned East for a stint in Wakefield, Rhode Island, in 2003 and ’04. He has since lived in Los Angeles. Lately, he’s published “The Awake Field" and new editions of his ongoing series “Yeast Hoist." And he’s in fine form in his album art (reproduced with permission here) for Lavender Diamond’s EP “The Cavalry of Light,” which was reissued by Matador Records in January, and album “Imagine Our Love,” which Matador released May 8. 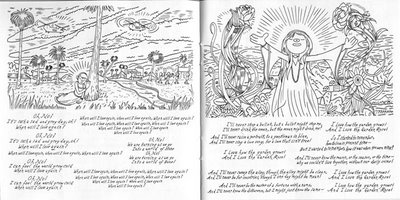 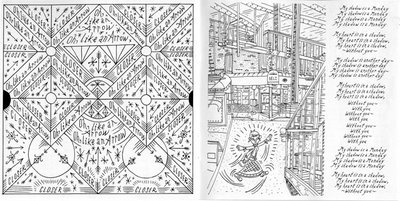 Nicholas Kahn and Richard Selesnick’s show “Eisbergfreistadt” at Pepper Gallery spins a tall tale of a giant iceberg, loosed by “heat from factory smoke,” that ran aground in a German port in 1923. As they imagine the story, chamber of commerce types declared it a free trade zone – the Iceberg Free State of the title – and currency called notgeld was issued. The iceberg became a tourist destination.

It inspired artists to utopian city planning, and their designs were reproduced on the currency, which inflation made worthless. The iceberg broke in two during a masked ball. Half melted. The rest drifted back to the arctic, with revelers stranded on its icy hills. And so on. 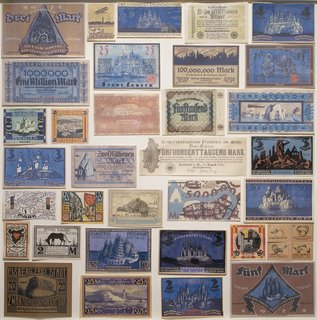 Kahn, who lives in Brooklyn, and Selesnick, who resides in upstate New York, met while studying at Washington University in St. Louis, where they both received BFAs in 1986. They’ve both spent time on Cape Cod over the years.

Kahn and Selesnick have collaborated for two decades. Recent projects have imagined a journey to the moon where astronauts found stranded Edwardian space explores and an Indiana Jones-type of adventure in Middle Eastern deserts.

Here Kahn and Selesnick’s three main panoramic color pictures, which appear to be a concocted from Photoshopped photos and watercolor matte paintings, give glimpses of what happened after the iceberg floated back to the frozen North. A guy in a polar bear-coat paddles a snakeskin kayak over ice. Men in fur coats and animal masks play cards for heaps of worthless currency inside an iceberg cavern. Rescuers arrive via sea plane and dig out a man frozen beneath the ice.

In the gallery stands an actual wooden wheelbarrow piled high with bundles of the “worthless currency,” and a man’s coat and woman’s dress made from the bills. Black and white photos depict a massive iceberg rising behind the steeples of a town, a seaplane perched on the ice, ladies burning cash in a fireplace.

“Eisbergfreistadt” is an elaborate allegory about global warming and the follies of capitalism, tourism and art. It plays fun philosophical games about “worthless” money that is actually art and thus not so worthless. The wheelbarrow full of the stuff is priced at $20,000. The story could be an outtake from Michael Chabon’s new novel “The Yiddish Policeman’s Union,” a murder mystery set in an imagined teeming Jewish safe haven in Alaska. The stagy pictures look like Edward Gorey on ice. It’s amusing, but all the showy intellectual gymnastics wind up feeling forced. 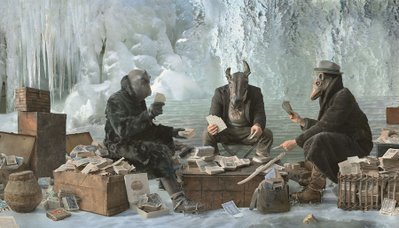