The Boston Foundation is planning to mail out revised copies of its controversial December report on the state of Boston’s arts and cultural nonprofits, the foundation says, because of errors found in the document’s data.

“The errors did not affect the conclusions one way or another,” Boston Foundation spokesman David Trueblood tells me by e-mail. “Typically they were typos that happened after the analysis was completed.”

The report, “Vital Signs: Metro Boston’s Arts and Cultural Nonprofits, 1999 and 2004,” which was originally released on Dec. 19, has irked some with its recommendation that small local arts groups that may be struggling to attract audiences and remain financially viable should consider shutting down. (For more details on the report and community response, see Geoff Edgers’s reports here and here.)

“There is a corrected PDF on our website at tbf.org,” Trueblood writes. “There were a number of errors in the data provided by our consultant that just inched over the line of acceptability. No pattern to them, but [Boston Foundation senior program officer] Ann McQueen felt it was necessary to make the correction. We considered just doing an errata sheet, but these reports have a long and fruitful life, typically, and errata sheets can get separated. Hence the decision to reprint. We have just received the new and improved copies and are planning to send them out to all who attended the forum.” 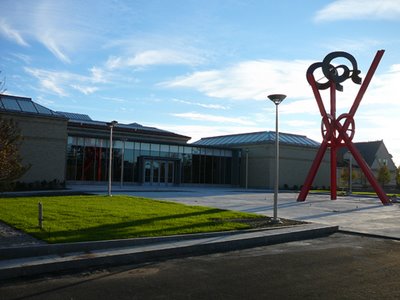 The Currier Museum of Art in Manchester, New Hampshire, plans to reopen on March 30 after a 20-month, $21.4 million renovation and expansion.

The 33,000 square-foot addition increases the museum’s space to nearly 90,000 square feet. The expansion includes a new north entrance (pictured at top, with lobby pictured below), 50 percent more gallery space (see below below), two new classrooms, an 180-seat auditorium (see bottom), a Winter Garden with café, and new outdoor court. The project also includes two new art commissions: Mark di Suvero’s “Origins” standing in the outdoor court (pictured at top; see my post about it here) and a wall drawing in the Winter Garden by the late Sol LeWitt.

The project was designed by the Boston firm Ann Beha Architects, which has also done work at the Portland Museum of Art in Maine and the New Britain Museum of American Art in Connecticut.

Photos courtesy of the Currier. 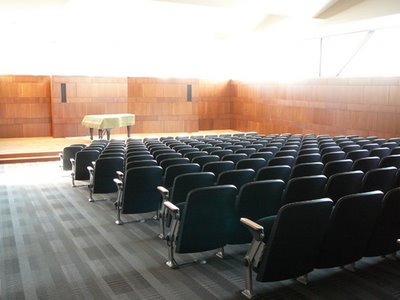 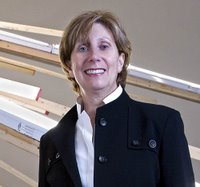 The Wadsworth Atheneum in Hartford, Connecticut, has named the Smithsonian’s Susan Lubowsky Talbott to be its new director. She is expected to begin the job full-time on May 1, according to the museum, replacing Willard Holmes, who lead the institution from March 2003 to April 2007. (Here’s my post about Holmes's February 2007 announcement that he would be leaving.)

As the Hartford Courant reports, Talbott is taking the reins of a museum that “has been dogged by unrealized initiatives and financial concerns in the past 10 years.”

She was director and CEO of the Des Moines Art Center in Iowa from 1998 to 2005; executive director of the Southeastern Center for Contemporary Art in Winston-Salem, North Carolina, from 1992 to 1998; director of the visual arts program of the National Endowment for the Arts from 1989 to 1992; and director of two branch museums of the Whitney Museum of American Art from 1982 to 1989.

Related:
The press release the Des Moines Art Center issued when Talbott left there in 2005.


Here’s a selection of photos by Nicholas Nixon from his exhibit “Patients” at New York City’s Yossi Milo Gallery. They come from a series of large format photos of seriously or terminally ill patients that the Brookline resident and MassArt teacher shot over the past few years at Boston Medical Center, the Dana Farber Cancer Institute, Children's Hospital and Brigham and Women's Hospital, all in Boston.