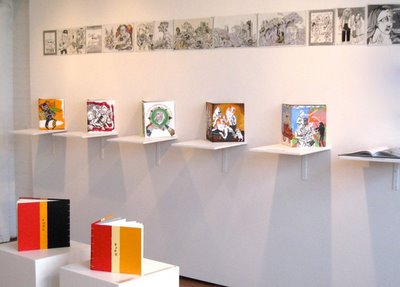 From my review of “Book As Post Modern Medium” at 5 Traverse:

An often overlooked factor of Providence's underground art scene that flourished in the decade bookending the start of the millennium was the central place of the zine. The artists of Fort Thunder, the Hive Archive, Dirt Place, and other local crazy collectives may now be best known for their screenprinted posters and their rock and roll, but their self-produced books — mostly photocopied collections of comics, drawings, or collages plus screenprinted covers — were one of the first ways (along with the music) that word of the glorious stuff going on here got out.

So "Book As Post Modern Medium (The Book Show)" at 5 Traverse gallery is a welcome sampling of the wealth of arty books being made locally, with cameos by some of these underground collective folks as just one example. 5 Traverse's Jesse Smith and Maya Allison spotlight five artists in the front room, then create a library of some 30 more in a second room (including picks by Brent Legault of Ada Books). 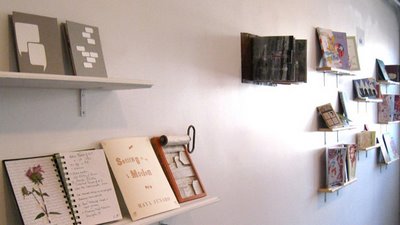 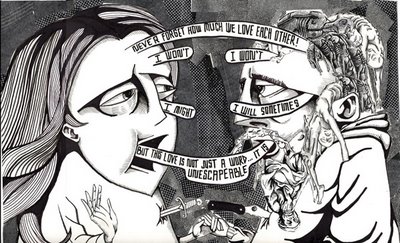 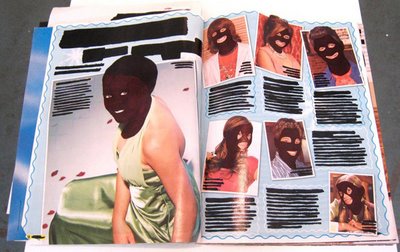 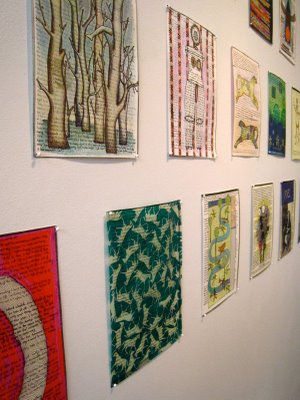 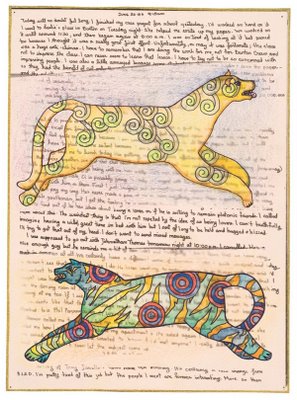 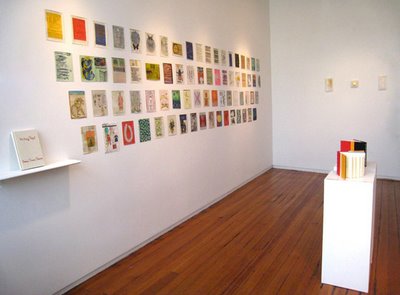 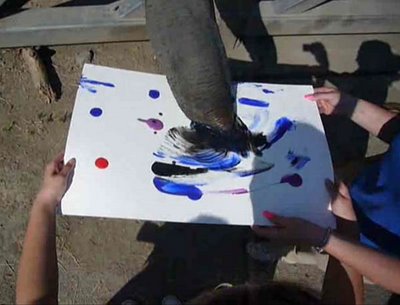 We’ve updated our sidebars – including “News Headlines” about such edifying things as elephants painting in Rhode Island (pictured here), exhibits to check out, and some grant deadlines (Artadia is June 15). We’ve also added a few sites to our list of “Additional Sites of New England Inquiry” – North Shore Art Throb, New Urban Arts, Maine Art Scene and The Berkshire Review.

Finally, we know that we have been somewhat, shall we say, in remiss in updating our sidebars lately. We hope to be more attentive as we move forward. As always, please send us your tips, invites and donations/bribes. 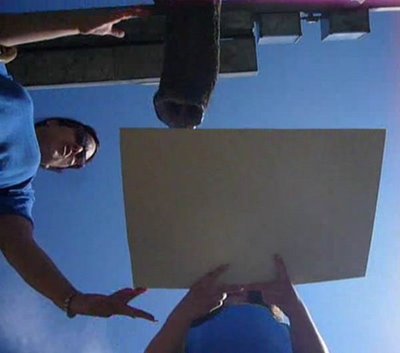 The Moving Wall, a portable half-size replica of the Vietnam Veterans Memorial in Washington, D.C., is on view at Plymouth Memorial State Park on Water Street from June 3 to 8, 2009. American Legion P.F.C. Edward A. Ribeiro Post 40 is hosting the visit.

The Moving Wall, which first went on display in 1984, is worth checking out, even if you’ve seen the original. Maya Lin’s 1982 design is riveting – it’s power coming from all those names of the American war dead etched in the blackness, but also from the visitors as well. I’m not sure if they have nighttime hours in Plymouth, but when it was in Gloucester some years back the memorial was especially striking when specially lit at night.

If you miss this visit, the wall returns to New England later this year – in Boston from Sept. 17 to 21 and Wolfeboro, New Hampshire, from Oct. 1 to 5.

Dana Neugent of Ashaway, Jean Rondeau of Woonsocket, and David M. Wax of Providence were yesterday appointed to the board of the Rhode Island State Council on the Arts when the state Senate confirmed Governor Donald Carcieri’s nominations.

They replace outgoing Council members Anne Quinterno of Providence, Margaret Melozzi of Tiverton, and Christopher McMahan of Providence. Douglas Bennett of North Smithfield was reappointed to the board.

Neugent is a media supervisor at the University of Rhode Island’s Feinstein Providence Campus and an adjunct assistant professor in the school’s Film Media Studies Program. Rondeau is president of Atlantic Bar Code Systems. Wax was executive director of the Rhode Island Philharmonic from 2001 to 2008.

Prosecutors drop some charges against Fairey

The Suffolk County District Attorney’s Office in Massachusetts announced today that is dropping 14 vandalism charges against Shepard Fairey that alleged he had plastered stickers on signposts and other public property around Boston.

However the district attorney plans to continue to try to prosecute the celebrated Los Angeles street artist, who is the subject of a major retrospective now at Boston’s Institute of Contemporary Art, on “13 similar offenses.”

“The Commonwealth has reviewed the police investigation and evaluated the evidence supporting these charges,” prosecutors said in today’s filing. “There is insufficient evidence to prove beyond a reasonable doubt that the defendant himself placed these stickers.”

The Massachusetts Cultural Council today announced 28 nonprofit arts organizations it has selected to each receive $10,000 in federal stimulus funds to help preserve arts jobs across the state. What’s notable about the grant recipients is that these are primarily small or mid-sized arts organizations where $10,000 could have a significant effect.

But also note that with the Massachusetts Cultural Council expected to get whacked with a 23 percent budget cut for the next fiscal year, which starts July 1, the end result may be a wash in which grant recipients win additional funding now but less in the next round of state art grants.

Among the organizations to receive funds are: Arlington Center for the Arts, Boston Center for the Arts, DeCordova Museum in Lincoln, Massachusetts Museum of Contemporary Art in North Adams, RAW Art Works in Lynn, Spontaneous Celebrations in Jamaica Plain, Underground Railway Theater in Cambridge, and the Worcester Art Museum. A full list is at bottom.

The Massachusetts Cultural Council reports that its recent survey of arts organizations that receive state funding found that 43% have laid off at least one worker since the start of the current recession. It says many others are reducing salaries and work hours, and instituting hiring freezes.

The $280,000 for art stimulus grants comes from Massachusetts’s share of $50 million for arts included in the American Recovery and Reinvestment Act, which was passed by the U.S. Congress in February. The Massachusetts organizations to receive funding were chosen from 143 applicants. They must spend the money between July 1 and Dec. 31. 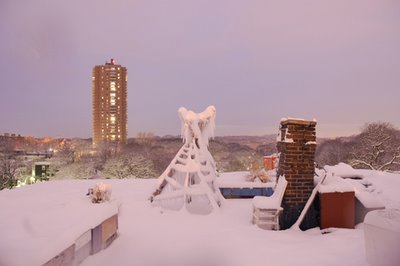 “Bird’s Eye” is a time-lapse video triptych of 11 months in his art school studio (he just received a master of fine arts degree from Boston’s School of the Museum of Fine Arts) shot from overhead. At a frenetic, sped up pace, things pile up, detritus skitters around, Phillips dashes around, and so on.

In “Ice Teepee,” a collaboration with Chloe Cerwinka, he builds a small wooden teepee frame on the roof of the Boston building where he resides, sprays it with water that becomes icicles, then films day and night, snow and clear, etc.

“Drawing with Light” shows him dancing around a studio space – usually naked, save for sneakers – with a light that through a trick of shutter speed creates patterns in the air. Plus cameos of an expressionist figurative painting.

Phillips’s expressionist performance videos are entertaining to watch – especially as a sort of ambient background visuals – especially the goofball running around naked. They’re like an old MTV music videos with nice historical echoes of ‘60s performance art as well as documentary films of Picasso and Pollock painting. But unlike those predecessors, Phillips’s actions don’t seem to get beyond goofy larks to something more resonant. And that’s the ingredient that he needs to add. 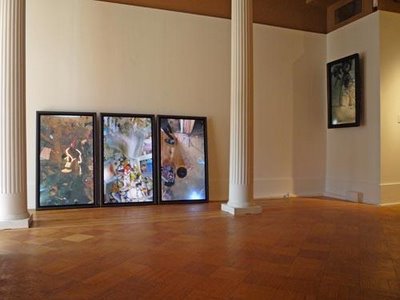 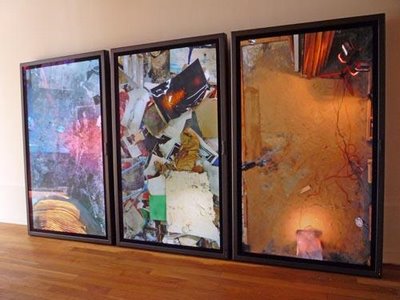 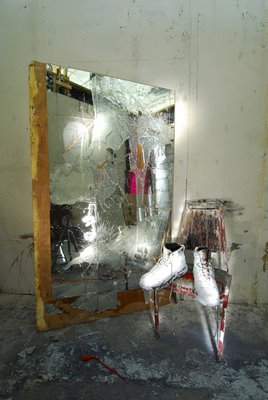 Jane Smaldone’s paintings are rendered with a fetching awkwardness and seeming naiveté that can mask how complexly, alluringly eerily bewitching her scenes are.

In her new show at Nielsen Gallery, the Roslindale artist’s 2009 canvas “In a Colorful World (Girl with Red Sky)” (pictured above) is a red-on-red symphony featuring her daughter in what looks like a red fleece top and gold-green skirt (note the rubbed on lacy patterning) seated before a cloudy deep red backdrop. A blue butterfly flits by. A green bird perches on a branch. Red flowers sprouting up from a bottom corner seem to have eyes. The air is charged with a buzzing nervous energy that insinuates itself into your consciousness.

So much of the crackle of Smaldone’s paintings comes from her feel for color (rich reds, sickly grays and greens) and her careful compositions. Each painting tends to focus on a few things particularly placed – her coming-of-age daughter, a vase of flowers, a stone, a broken branch, a bird. Each one accenting the others. It’s like a pieces in an exquisitely played board game or rocks in a Japanese garden. Each piece lands in just the right place and is freighted with feeling. 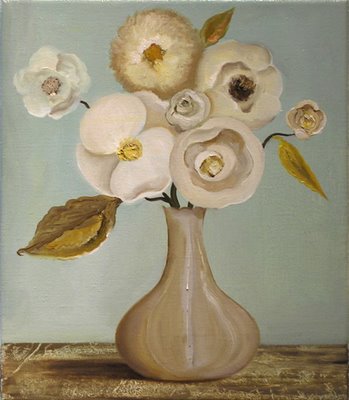 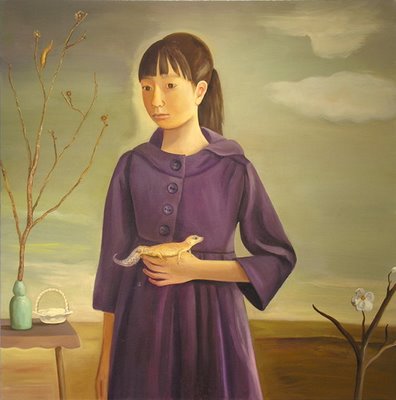 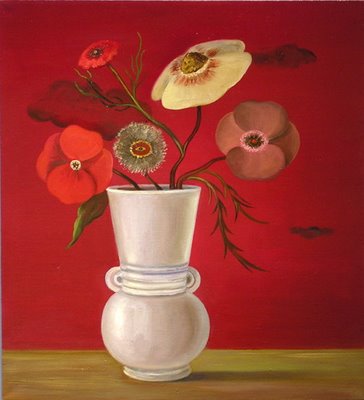 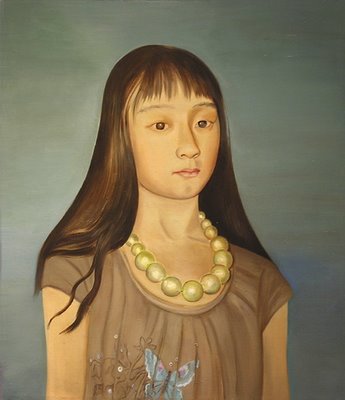 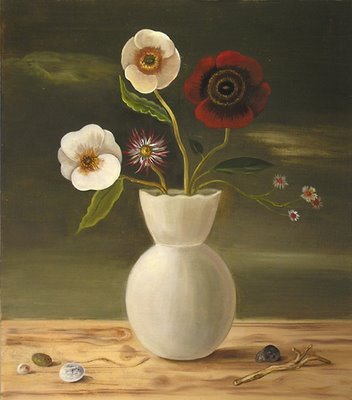