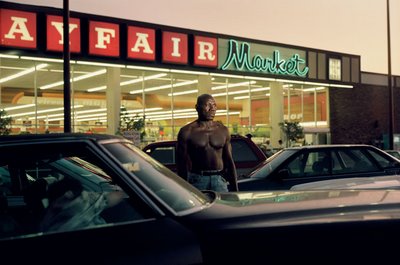 Here’s my review of the 125-photo Philip-Lorca diCorcia retrospective that’s on view at Boston’s Institute of Contemporary Art. His work’s insistent artificiality, which seems an exploration of advertising and fashion photography, drains out feeling and soul. Many of his people seem more zombie than human. It frequently leaves me fleeing indifferent. 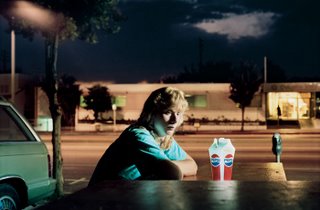 DiCorcia was born in Hartford, Connecticut, in 1951; earned a bachelor’s degree from Boston’s Museum School in 1975; and was included in ICA’s 1995 exhibition that named “Boston School” photography. His work is often compared to the Jeff Wall, Cindy Sherman and Gregory Crewdson, other photographers who elaborately stage their scenes. But Annie Leibovitz may be a more apt comparison, because, like Leibovitz’s portraits, diCorcia is often playing in the area of documentary, but projecting his ideas, his look onto his subjects. 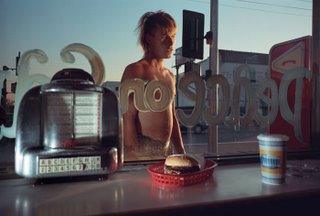 This is most apparent in his “Hustlers” series (shown here) from 1990 to ’92. DiCorcia decided to photograph male prostitutes in Los Angeles at the height of the conservative crackdown on “indecent” art (think Andres Serrano’s Piss Christ and Robert Mapplethorpe’s graphic photos of sadomasochistic gay sex) and in the wake of the Reagan Adminstration’s tardy response to AIDS (diCorcia lost a brother to the epidemic in 1988). I can’t help noting that 1990 was also when Julia Roberts leapt to stardom by playing a prostitute in the hit film “Pretty Woman.” 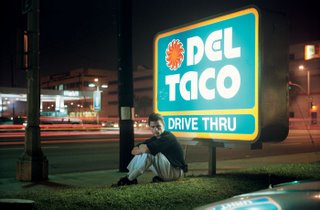 The “Hustlers” photos resemble social documents, but diCorcia picked locations, set up his camera and lights and then drove out to hire prostitutes (he cheekily paid them with money he’d received from a 1989 National Endowment for the Arts grant, though this seems to have provoked no government complaint) to play prostitutes in his invented scenarios. A hard-looking dude with his hair slicked back sits on the lawn next to the sign for a taco joint. A topless buff guy stands between cars in a supermarket parking lot staring into the distance. A guy lays sprawled in the middle of a sidewalk atop John Lennon’s star on the Hollywood Walk of Fame. A Greyhound bus passes behind him, bringing to mind the disastrous end of the 1969 male hustler film “Midnight Cowboy.”

This isn’t a documentary about prostitutes, but fictions depicting a Hollywood myth of prostitutes. DiCorcia is thinking about the idea of selling images – whether it’s photos, or people using their looks to sell themselves, or people hiring prostitutes to fulfill a fantasy in their heads.