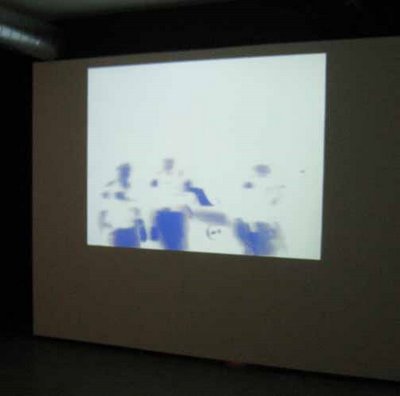 Cambridge artist Suara Welitoff, who was featured in last year’s MFA exhibit “War and Discontent” and won the museum’s 2002 Maud Morgan Prize, presents three short looped 2007 videos, based on appropriated footage, in “Anonymous” at Allston Skirt. In one, the camera zooms in on a green uniformed soldier dragging a person across an exposed area which looks like an urban plaza in some war zone. The person could be a wounded comrade or a corpse. Can’t tell.

The subjects in all three works in this “Anonymous” series are simultaneously particular but vague. The first clearly features a solider, but where and when? The scenes are Rorschach tests for viewers to conjure up images from their memories to try to divine the subject and meaning of the works. This one makes me think of an incident during the American invasion of Fallujah in November 2004 in which a platoon of Marines got caught in interlocking enemy fire as they dashed across a street. As reported by the New York Times’ Dexter Filkins and photographed by Marine combat photographer Joel Chaverri (his photos of the incident have mostly disappeared from the Web, but you can see them here and here), when some men went to get the fallen guys they too got hit. A sergeant bled to death.

The video “Untitled (Blue)” shows blue negative (or something like that) footage of police officers, some with batons, marching past a police car. In “Untitled (Double),” a video projection makes a diptych, in black and red, of footage of police and what look like protesters. The officers march on the crowd of people, knocking them down and running them off. One person in the group falls, and seems to be trampled by the fleeing protesters.

War and government suppression of dissent – do I detect current events here? The video loops are all grainy and short, maybe a few minutes in length. And the action plays in slow motion, which pumps up the ominous drama of the videos – and particular moments, like the queasy, tragic seconds when that person slowly, slowly falls. 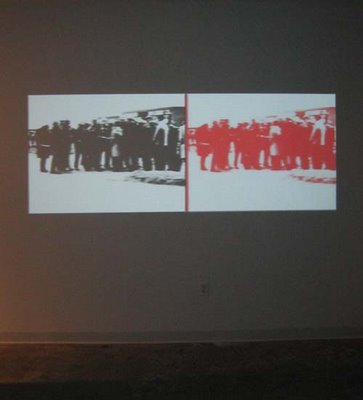 “Experiencing the War in Iraq” 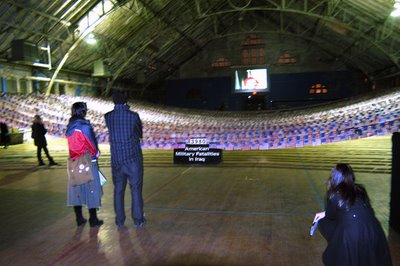 From my review of “Experiencing the War in Iraq” at Machines with Magnets and Arts Exchange (Pawtucket Armory) in Pawtucket:

March 19 marks the fifth anniversary of the start of our war in Iraq. And with it arrives “Experiencing the War in Iraq,” a timely multi-venue art exhibition and series of video screenings, music, talks, and performances.

The project was sparked last spring when Fall River artist Jeff Carpenter heard from friends about a talk by an Iraq war veteran. An audience member noted that the crowd was mostly gray-hairs and asked the speaker how to attract young people. Carpenter recalls, “He said, ‘Well, they’re probably not going to be so interested in listening to speakers as if you had art and music.’ ”

So that’s just what he set out to assemble with help from co-curators and Providence artists Leif Goldberg, Raphael Lyon, and Erin Rosenthal. An open call attracted about 600 international submissions, from which they chose some 40 pieces to exhibit at Machines with Magnets and the Arts Exchange in Pawtucket. Some of the artists are American veterans or Iraqis. The goal, Carpenter says, is “to reconnect the people who have been disenfranchised or who are cocooning from the reality of the war.”

“We are desensitized to death,” Rosenthal says. “And a lot of these works here bring it back in a way you don’t get from the mainstream media. And that’s why it’s important, because we’re talking about the destruction of human lives.”

An American flag-draped coffin “crashes” through a gallery wall. A monstrous skeletal figure — assembled from bullets, grenades, and artillery shells — haunts one gallery. There are mild-mannered abstractions and generic photos of American troops patrolling Iraq. A video documents a Providence anti-Iraq war street protest. Milton Stevenson creates a mandala of “Support Our Troops” ribbon auto magnets. A couple of artists pulp veterans’ uniforms to turn them into paper.

The art is by turns overwrought and polite; much of it is mixed. But the shows feel scrappy and necessary. They give you space to reflect on the accomplishments and sacrifices of our military: How is the war going? How could it end? Are we safer now? Is Iraq better now? What are the repercussions? 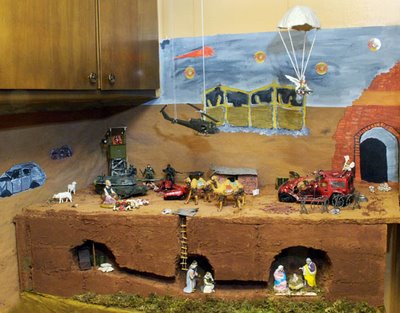 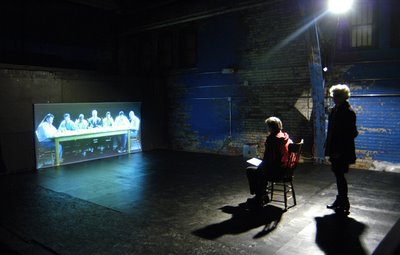 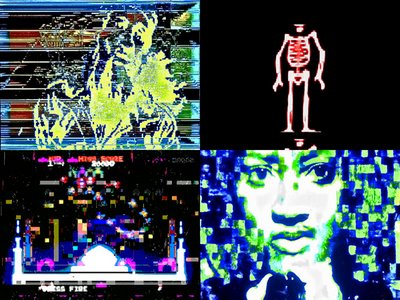 Boston’s Institute of Contemporary Art today announced the four finalists for its 2008 Foster Prize, which aims to “nurture and recognize Boston-area artists of exceptional promise.” They are Catherine D'Ignazio of iKatun and The Institute for Infinitely Small Things, Rania Matar, Andrew Witkin and Joe Zane. Read the ICA’s press release here. 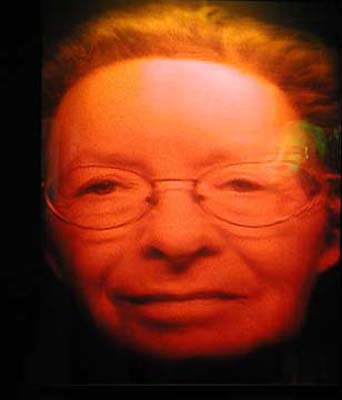 Brookline artist Harriet Casdin-Silver, a trailblazer and innovator, who was internationally known for her magical holograms, died Sunday after a brief illness. She was 83.

Casdin-Silver began making holograms in the late 1960s. DeCordova Museum curator (and now acting director) Nick Capasso trumpeted her as “America’s foremost art holographer” and “a pioneer of the art-and-technology movement of the second half of the twentieth century” when the museum mounted a retrospective of her work in 1998.

She hoped the novelty of the medium would attract an audience for her political statements – in particular, feminist ones.

“A lot of people use light to get technical effects,” Casdin-Silver told me when I wrote about her last show at Gallery NAGA, exactly a year ago. “That was never my mission. My mission was to help women grow in every way – psychologically, sociologically, and in believe in themselves. And I taught too, so I did reach a lot of women.”

She had kept a studio at Fort Point Channel since 1985, but had to move out at the end of January as the building was being transformed by new owners.

“I may just quit," Casdin-Silver told me a year ago. "But I can’t quit. My work keeps me going.”

But she was drained by the move. She fell ill with the flu, which turned into pneumonia, and landed her in the hospital for her final two and a half weeks.

A memorial service is scheduled for 1:30 p.m. tomorrow at Forsyth Chapel at Forest Hills Cemetery in Jamaica Plain.

Gallery NAGA, which had an exhibition of her self-portraits scheduled for June, still plans to present that show but with the addition of a celebration of her life.

How to define Succe$$? 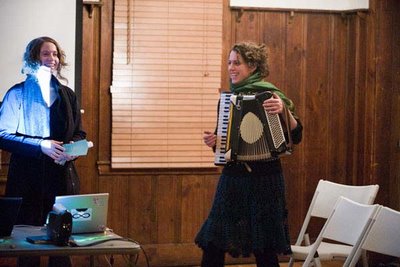 Attending Platform 2’s “Failure Support Group” on Feb. 29 got me thinking about how wonderfully confused we all get in America when money doesn’t define success – even if we’d prefer money didn’t define success.

The evening started with people talking about their failures to the group assembled at Cambridge’s Democracy Center. Matt Nash talked about an art project (designed to fail?) in which he and a collaborator in another city tried to share the same emotions. One of the evening’s organizers, Jane D. Marshing, talked about her disappointment with the discussion at Platform 2’s forum of the theme of the “commons” last summer. A man talked about snow globes he manufactured that depicted the Biblical plagues of Egypt (wow!), but which failed to sell.

This lead to a free-form group discussion of failure, that was actually quite supportive. The general theme was that things that seemed like failures were in fact – at least partly – successful because the artist was doing work, or getting shows, or reaching at least one person, and so on.

The question was how do we define success. There are ways we quantify success: how many shows you get, how many people attend your events, how many people laugh at your jokes, how many hits your website gets, etc. But in our society the criterion that trumps all others is money. Success equals making money.

But relatively few artists make much money from their art – or at least enough to live on. Some by choice; some by fate. Either way there’s a skepticism of money in the art world.

But if money isn’t the criterion of success, how do we keep score? We turn to squishy metrics like taste or opinion – our own, our friends’, curators’, critics’, and so on. It’s that squishiness that makes it all so complex and interesting – but it’s also what can make it so nerve-wracking.

Related:
The Chronicle of Artistic Failure in America. 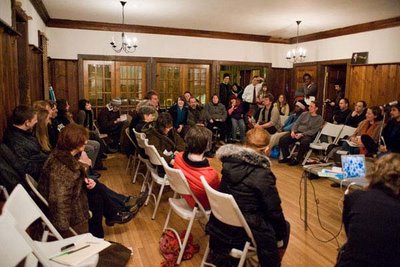 We’re sorry to hear that Craigen Weston Bowen, the Philip and Lynn Straus Conservator of Works of Art on Paper and deputy director of the Straus Center for Conservation at Harvard University’s Fogg Art Museum, died March 1 at her Lexington home. The 54-year-old, who began working at the Harvard art museums in 1975, had been diagnosed with cancer just 16 months ago.

The Massachusetts Cultural Council has begun a blog ArtSake, where they celebrate "art and art-making for its inherent merits, for its own sake. We’ll use this space to celebrate our state’s innovative and creative minds, highlight new projects, and feature ideas and content straight from the artists.”

The Rhode Island State Council on the Arts has a very active blog that it’s been publishing since January 2005. It’s wicked ugly, but chock full of info about exhibitions and events and such.

“It’s Getting Hot In Here” at Montserrat

and “Greed, Guilt & Grappling” at BCA 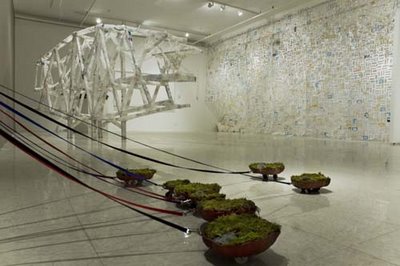 From my review of “It’s Getting Hot In Here” at Montserrat and “Greed, Guilt & Grappling” at the Boston Center for the Arts:

When Al Gore won the Nobel Peace Prize last October, it was a triumph for anti-global-warming forces as well as a triumph for art. For years, scientists have struggled to focus attention on the urgent dangers of global warming, but with his film "An Inconvenient Truth," Gore summed up the problem in a way that helped millions finally get it, kick-started the “green” environmentalism movement, and gave a push to government and private efforts to stem climate change.

Going green has become so popular and pervasive a phenomenon — if still only beginning to produce manifestly different behavior — that it’s easy to forget how new this sea change in thinking is. Gore’s film premiered in 2006, and it quickly affected the art world, with global warming, sustainable living, and green becoming a major focus of art. In the past year or so, exhibitors have begun to round up the stuff. New shows at Montserrat College of Art in Beverly and the Boston Center for the Arts represent the two poles of green and global-warming art: inward-turning meditative gallery art and outward-reaching, simply framed activist art.

Curated by the college’s Leonie Bradbury and Shana Dumont, Montserrat’s “It’s Getting Hot in Here” addresses “how the progressive philosophy of sustainability affects art making.” The art is quiet, gentle, stylish, thoughtful, often exquisitely crafted, occasionally droll. The primary method of the eight artists is recycling, via compassionate conceptualism and crafty minimalism.