Some locals to be featured in 2008 Whitney Biennial

Seven artists with New England ties – including two who live in Cambridge – are among the 81 artists who will be included in the 2008 Whitney Biennial, the New York museum announced yesterday.

The two Cantabrigians are filmmaker Robert Fenz, a Michigan native, and multidisciplinary dude Stephen Prina, an Illinois native and Harvard teacher, who splits his time between Los Angeles and Cambridge.

The exhibition, which opens March 6, 2008, is being curated by Whitney curators Henriette Huldisch and Shamim M. Momin, and overseen by Donna De Salvo, the Whitney’s chief curator and associate director for programs. They have received guidance from Newton’s Linda Norden, an independent curator formerly at Harvard; Thelma Golden,director of The Studio Museum in Harlem; and Bill Horrigan, director of the media arts department at the Wexner Center for the Arts at Ohio State University. 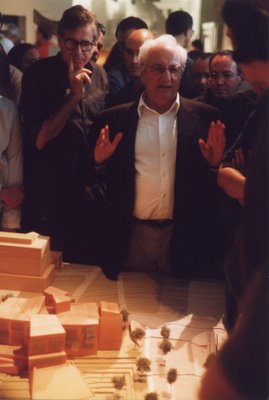 When the news came last week that MIT was suing Los Angeles architect Frank Gehry (pictured above) over design flaws in the institute’s Stata Center in Cambridge, many in the community seemed to say, “of course.” The Gehry-designed building is leaky (as Steve Bailey wittily reported six months after it opened), moldy and cracking, the institute charges. And they say it also causes snow and ice to fall dangerously. People seemed to relish in the schadenfreude: Gehry’s impossible-looking buildings maybe are impossible.

Or maybe not. There seem to be relatively few reports of structural flaws in past Gehry projects – which is remarkable for an architect whose designs are so unconventional. Frank Lloyd Wright, for example, was notorious for leaky roofs.

When the Globe broke the MIT lawsuit story on Nov. 6, it mentioned no problems with previous Gehry buildings. The next day, The New York Times reported:

Mr. Gehry has had to address problems with his buildings before. In December 2004, for example, he agreed to sandblast parts of his $274 million Walt Disney Concert Hall in Los Angeles in response to a report that found that the building’s skin produced excessive glare.

When the New York Times reported on the “excessive glare” at the Disney Concert Hall in 2004, it added:

Other Gehry projects have had similar problems. His $62 million swirly building for the business school at Case Western Reserve University in Cleveland has been likened to a tanning mirror and sent snow and ice sliding off the sloping stainless-steel roof onto the heads of pedestrians below.

The wood floor in Mr. Gehry's Condé Nast cafeteria in New York was replaced with terrazzo two years ago because it was a hazard to high-heeled shoes.

Three years after Mr. Gehry's celebrated Guggenheim Museum in Bilbao, Spain, opened in 1997, brown stains on the titanium exterior provoked embarrassment and finger-pointing. Mr. Gehry said at the time that it was simply a matter of cleaning.

A 75-foot copper-clad trellis, the signature element on a plant Mr. Gehry designed for the furniture maker Herman Miller in Rocklin, Calif., was torn down in the late 1990's because of a leak. Mr. Gehry insisted the flaw was in the execution and not in his design.

So let’s tally the results so far: Gehry has twice had problems with leaks, twice with glare, twice with falling snow, once with exterior stains, and once with a plywood cafeteria floor that, according to a 2002 Times report, “couldn't take the relentless beating” of foot traffic.

The Stata Center was built on the site of MIT’s famed Building 20, a structure thrown up during World War II, and intended to be temporary, but which stood for half a century. Just before it was torn down to make way for Gehry’s building, The New York Times reported: “The building's windows never fit, and would sometimes fall out in stiff winds. The place was hot in the summer, cold in winter and drafty all the time. Soot blew in from the city, and rain poured in through the roof leaks.”

Related:
What about Norman Foster, the London architect who designed the Boston Museum of Fine Arts’ current renovation and expansion? The Guardian reported in 2001 that:

Norman Foster's Sainsbury Centre in Norwich had to have every single aluminum cladding panel removed because of a manufacturing defect. They were replaced with an alternative design using flat white panels. There have also been problems with the glass walls at his airport in Hong Kong, to say nothing of the celebrated case of the wobbly bridge [London’s Millennium Bridge], though Arup, the engineers, now say they know how to fix the problem.

And the London Independent reported in 1999:

The glass-loving architect Norman Foster has had more than his fair share of problems. At his pounds 12bn Chek Lap Kok airport in Hong Kong, every single section of the terminal's 70ft high glass walls are being replaced at a cost of around pounds 13.5m. Mysterious bubbles were found in some laminated glass panels, while others looked as if someone had thrown a brick at them.

Another Foster building, the Business Promotion Centre at Duisburg, Germany, suffered glass problems following its opening in 1993, and the opening of the architect's new social studies faculty at Oxford University has been delayed after a window mysteriously fell out. Most embarrassingly of all, the floor-to-ceiling windows at Foster's own offices leaked during torrential rain this autumn.