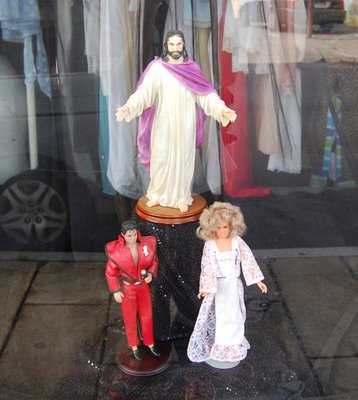 Tribute to Michael Jackson and Farrah Fawcett in the window of Richard Leonard's Bananas Vintage Clothing store in Gloucester, Massachusetts. 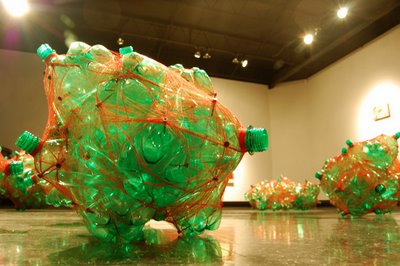 From my review of “Summer Adjunct Faculty Exhibition: Two Sculptors and a Painter” at Rhode Island College’s Bannister Gallery in Providence, which features Jamey Morrill of Providence, Earnest Jolicoeur of Scituate and Michael Cochran of Norton, Massachusetts:

It seems like a simple exercise you might give students: Get a bunch of plastic bottles, lots of thread, and make some art from it. It's the kind of assignment teachers give to get students thinking about sculptural form and structure. And usually the results feel like a dumb exercise.

But in "Summer Adjunct Faculty Exhibition: Two Sculptors and a Painter" at Rhode Island College's Bannister Gallery, Jamey Morrill of Providence makes it work. His sculpture Larvae features green plastic bottles screwed together and then bound by webs of red thread to form recycled-junk crystals set right on the gallery floor. Gallery director James Montford places a mat on the ground to encourage you to get down at their level and study their forms. 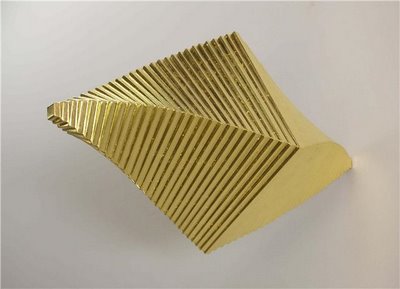 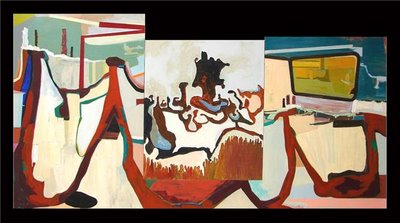 In loving memory of the King 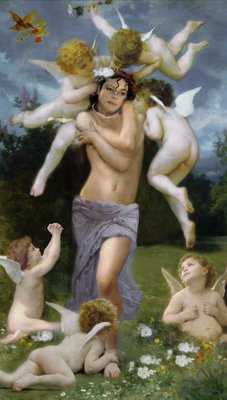 We were very sorry to learn that Michael Jackson died today at age 50.

I just saw this article, which makes me think that this Dana Schutz piece is happening right now.

I've always wondered how Michael Jackson would have been regarded if he had died in 1993 or how Bob Dylan's iconography would be treated if he'd died in 1966. I was too young to be aware of Elvis' death or John Lennon's but in the midst of Michael Jackson's untimely death, I appreciate the focus on his phenomenal cultural contributions as opposed to the gruesome drama of his tragic decline. I'm living in Asia now and all the news reports regard him with a familiarity I didn't quite expect.

Of course, another weird thing is how my work about him has suddenly taken a whole new meaning.

We invite you to use the comments to post tributes to Jackson. 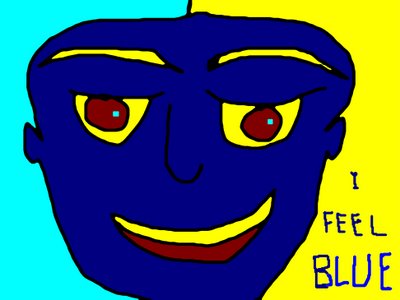 From my review of "Ringo Starr — Artist” at Chabot Fine Art Gallery in Providence:

Ringo Starr was the best artist in the Beatles. And, I believe, the best artist to appear on “Shining Time Station” too. (Sorry, George Carlin.) It feels really weird to say, but it's the undisputable conclusion I drew from seeing "Ringo Starr — Artist" at Chabot Fine Art Gallery. The exhibit presents prints by the former Beatles drummer as well as Paul McCartney, John Lennon, and . . . Al Hirschfeld, the celebrated caricaturist apparently filling in as the fifth Beatle.

Starr's prints here are best described as goofball digital doodles. Most of them are fish-lipped faces, like the red one with green lips and blue googly eyes printed on a drum head. They're drawn with heavy black outlines and filled in with bright artificial computer colors. "I started in the late '90s with my computer art," Starr has said. "While I was touring it gave me something to do in all those crazy hotels you have to stay in on the road." They look it. 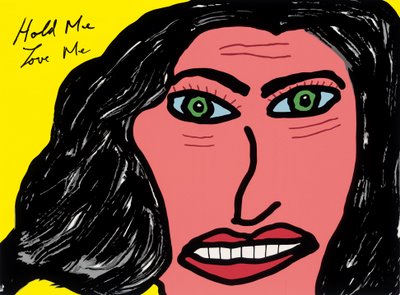 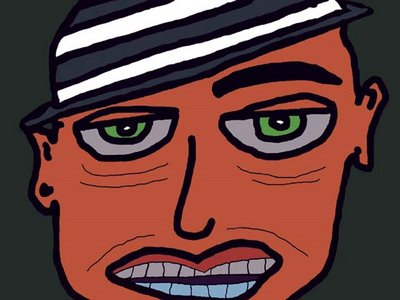 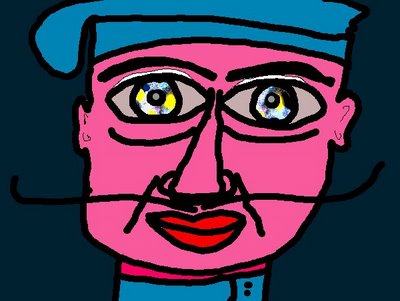 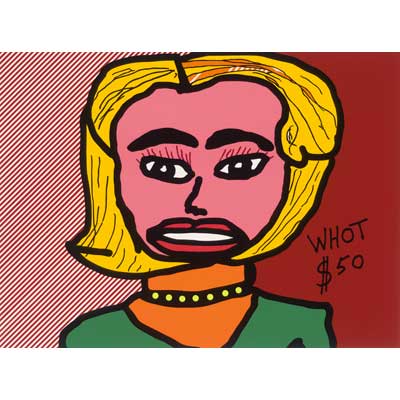 Speaking of folk imagery in the United States, whither is 20th century “folk” and “outsider” art in the collection of, say, Boston’s Museum of Fine Art? Thanks to the late Maxim Karolik, the MFA has one of the greatest collections of pre 20th century American folk art in the land, including the Harriet Powers quilt pictured below. But since then, not much. The museum seems not to own a single Morton Bartlett, Henry Darger, Howard Finster, Morris Hirshfield, Martin Ramirez, Drossos Skyllas, Bill Traylor or Joseph Yoakum. I can’t tell if it has any Gee’s Bend quilts. (Check for yourself here.)

Some argue that the Museum of Fine Arts needs more Picassos – well, actually more early 20th century European Modernist art in general – but at least the MFA has some examples of these dudes’ work. Considering that some of the greatest artists of the century turned out to be “folk” artists – and folks like Henry Darger are exceedingly influential on the generation of "fine" artists in their 20 and 30s – the complete absence of these artists from the collection may be a more pressing concern today. 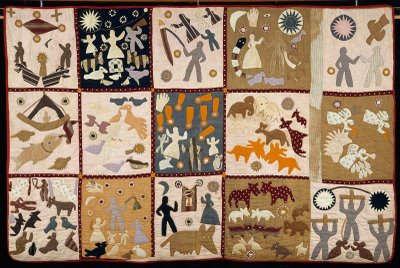 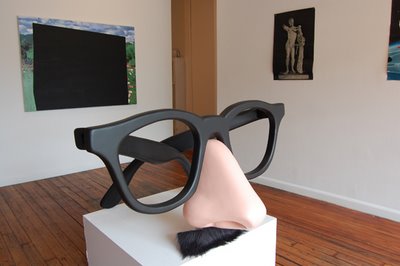 From my review of Providence artist Quinn Taylor’s just closed show “1979-2009” at Stairwell Gallery in Providence:

Quinn Taylor of Providence makes philosophical wisecracks about the nature of art in "1979-2009" at Stairwell Gallery. The art includes black-and-white paintings of classical sculpture; bucolic landscapes seemingly blotted out by large lopsided rectangles; shiny silver paint covering cockeyed quadrilateral canvases that look like glam Ellsworth Kelly covers; and paint slathered Abstract Expressionist-style on top of what seems like images of Earth from space. In the middle of the gallery is a sculpture of giant Groucho Marx-like nose and glasses titled “In My Absence.” They're all shot through with a dry, smart wit that tries to make you think but doesn't necessarily make you laugh. 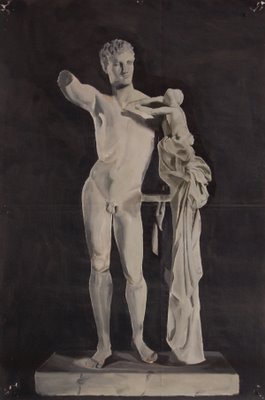 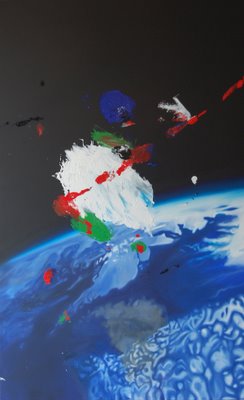 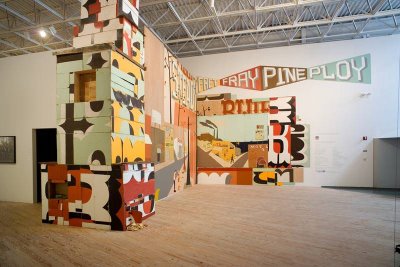 I’ll be speaking on a panel about the exhibit “The Old, Weird America” at DeCordova at 6:30 p.m. Thursday, June 25. But the folks you should come to hear are exhibiting artists Barnaby Furnas and Matthew Day Jackson as well as exhibit curator Toby Kamps of Contemporary Arts Museum Houston, Ken Turino of Historic England, and Megan Marshall, an assistant professor at Emerson College and author of the 2005 biography "The Peabody Sisters: Three Women Who Ignited American Romanticism." The talk is free and open to the public.

The exhibition is billed as “the first museum exhibition to explore the widespread resurgence of folk imagery and mythic history in recent art from the United States.” From my review:

In the beginning, there was the Old West. The legend of the Old West's cowboys and Indians, flinty pioneers and buffalo killers, sheriffs and gunslingers started with the tall tales that cowboys themselves told of their glorious exploits. Then reporters did some more embellishing. And Buffalo Bill Cody, who had been awarded the Congressional Medal of Honor for his fighting during our Indian Wars, started a circus in which he hired real Native Americans to re-enact with him the battles on stage. Which in turn inspired Hollywood Westerns.

That sort of based-on-a-true-story version of our history, in which fact gets thrillingly mixed up with fiction and turns into national myth, is the focus of the DeCordova Sculpture Park + Museum exhibit "The Old, Weird America: Folk Themes in Contemporary Art," which was organized by Toby Kamps for Contemporary Arts Museum Houston.

The title is borrowed from Greil Marcus's 1997 book about Bob Dylan's “Basement Tapes,” an album that came out of Dylan's noodling around with traditional and original songs in 1967 while he was holed up in upstate New York recovering from a motorcycle crash. In the songs, Marcus wrote, "certain bedrock strains of American cultural language were retrieved and reinvented" as Dylan channeled the rough-and-tumble outlaw America of old folk songs, murder ballads, tramp ditties, and blues.

"Old, Weird America" assembles 18 artists who mine this vein of American history/legend, who play at being old-timey. It's a ripe subject, and it maps what may be a generational trend — most of the artists here were born in the early '70s. 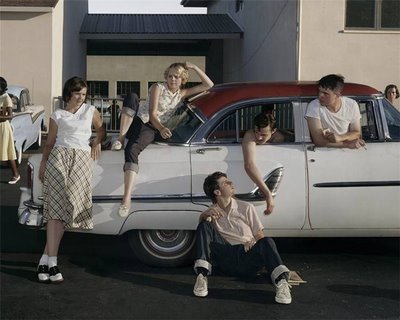 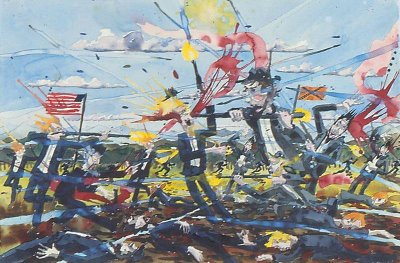 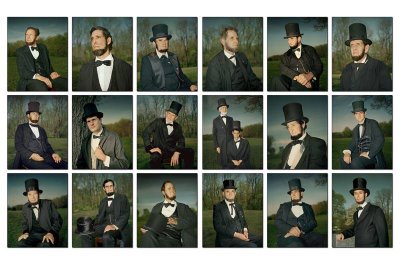 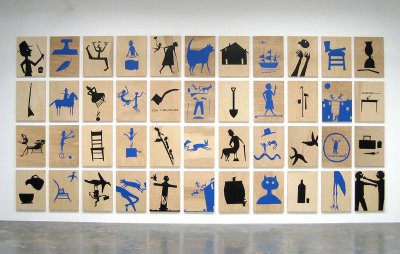 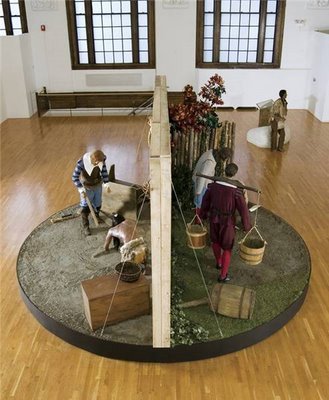 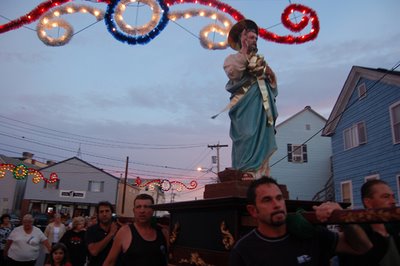 Speaking of folk imagery in the United States, this week I’ll be spending a lot of time up in Gloucester, Massachusetts, which is presenting its annual St. Peter’s Fiesta, a glorious Italian-religious-fishing-drinking festival. It runs much of this week, but if you have to pick a day come Sunday and see the beautiful procession through town, the crazy greasy pole contest, and then fireworks. See The New England Journal of Aesthetic Research’s Fiesta photo archive here.

Brown consistently puts together some of the most deep-think exhibitions in the region – and her work at the PRC will be missed. I hope her studies put her on the path to a prominent post at, say, the International Center of Photography or the Museum of Modern Art, someplace where she can match her smarts with a more sizeable audience and more sizeable budget. Brown has excelled at mapping emerging trends in photography. She should be at a venue where she can help define today’s canon. And imagine what she could do with photographer retrospectives. 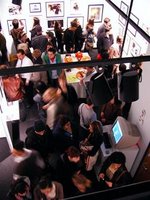 The Photographic Resource Center at Boston University has launched a matching-fund drive to help it ride out our Not-So-Great Depression.

The institution explains: “A number of PRC board members have come together to launch a matching fund drive. For every dollar that you give, an additional dollar will be contributed to the PRC, up to $20,000. Our goal is, with your help, to raise $40,000 before June 30th from this special fundraising initiative. … We understand that these are challenging times for everyone. Know that your contribution will make a real difference.” 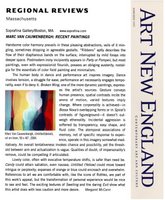 Art New England has been acquired by New Venture Media Group, which has offices in Boston’s Fort Point community and publishes the bi-weekly visitors' magazine Panorama and the Boston edition of Playbill.

If you care about local art – and its local coverage – it’s important to watch how this plays out. Art New England was founded by Carla Munsat, a transplanted Los Angelino, and Stephanie Adelman, a transplanted New Yorker, who felt Boston’s art scene was split up and isolating. They decided to launch a magazine in December 1979 to try to bring the local community together in discussion – and to expand what the idea of the local art scene meant.

As Art New England approaches its thirtieth anniversary later this year, it plans to launch a redesigned and expanded website. The press release adds that New Media Venture Group’s “interests include Show of the Month Club, the country's oldest member-based theater and travel club, and Panorama Custom Publishing, which provides editorial, design, marketing and printing services to a variety of for-profit and not-for-profit businesses and organizations such as The Newbury Street League, Massachusetts Lodging Association and Commonwealth Shakespeare Company. … The company also owns and operates a theatrical development and producing subsidiary, New Venture Entertainment LLC, in partnership with a Korean investment group with offices in Seoul and Tokyo. Recent projects include the Tony-nominated Broadway musical, “Cry-Baby;” last fall's South Korean tour of Boston Ballet; and in September 2009, a two-week engagement of the Broadway tour of “RENT” in Seoul.” 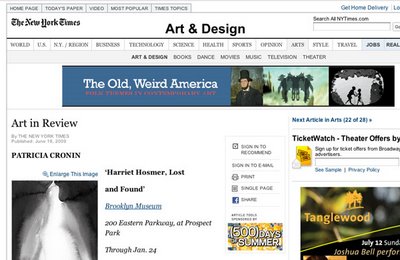 Note this advertisement for the DeCordova's "The Old, Weird America" exhibition on The New York Times's website last Friday.