From my reviews of the Malcolm Grear Designers exhibit at Rhode Island College's Bannister Gallery and Roger Mayer's “Soundless” at Chazan Gallery at the Wheeler School:

In 1969, Malcolm Grear Designers was hired by New York’s Guggenheim Museum to develop a new graphic identity for the institution. One of the results was a series of posters that boiled down the building’s trademark spiraling architecture into a design of four flat curving stripes that feel like the ideal form of the building that hovers in our minds.

“Inside/Outside” presents a trade show-like retrospective of the work of the Providence graphic design firm, which longtime RISD teacher Malcolm Grear founded in 1960. Here are examples of logos, package design, textbooks, exhibition catalogues, posters, signs, Olympic medals, and museum exhibits that it has produced. And there are plenty of sketches and mock-ups that give glimpses into the firm’s process.

The Institute for Infinitely Small Things 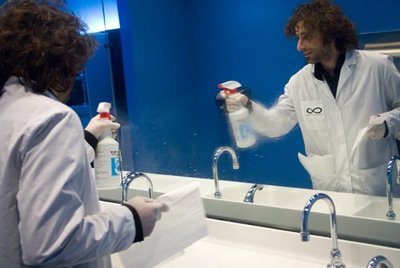 From my profile of The Institute for Infinitely Small Things:

One night at the end of February, seven members of the Institute for Infinitely Small Things were premiering their new performance, “The Working Is the Work,” at the Institute of Contemporary Art. (They perform it again on April 24.) Wearing their trademark white lab coats, with their Institute’s name and infinity symbol on the back, the collective of artists spread out through the museum and helped the ICA’s staff — scrubbing the lobby, counting visitors, standing guard, cleaning the café.

Instituter Katharine Urbati, who tidied the museum store, was asked about items for sale. Someone turned in a lost guidebook to her. “I love that people think I work here, and I’m wearing this ridiculous coat.”

One person asked Savic Rasovic, who was running an elevator for the evening, how long it took him to learn the job. “About a minute. We specialize in small things. And one of them is operating elevators.” Later, a woman suggested that he expand his horizons. “This is my stage,” he insisted — but then he quipped, “I’ll think about it. I may work in another elevator.”

Pictured: Savic Rasovic cleans an ICA bathroom during the Institute for Infinitely Small Things’ March 27 performance of “The Working Is the Work.”

Congrats to the Globe’s Mark Feeney of Cambridge who today won the 2008 Pulitzer Prize for criticism – in particular, the Pulitzer board says, “for his penetrating and versatile command of the visual arts, from film and photography to painting.”