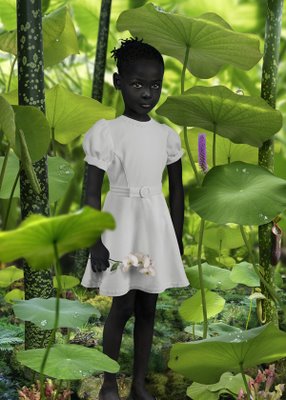 Dutch photographer Ruud van Empel has mesmerizing, gorgeous, magical photos in “Kids,” a three-person show at Brown University’s Bell Gallery focusing on digitally-manipulated photos of children. As I wrote in my review:

These photos, from 2003 to ’06, are assembled by combining as many as 100 images into a single scene. They recall the lavishly staged and retouched campy dream photos of French duo Pierre et Gilles; the chilly digitally-manipulated photos of children by German photographer Loretta Lux, and Chicago painter Kerry James Marshall’s scenes of black residents (their skin painted simply black) of housing projects called gardens.

Van Empel’s scenes are filled with ravishingly vivid colors, and dreamlike shifts of scale and space. Kids appear in their Sunday best or stripped down to shorts. He often photographs their heads, arms, legs, and outfits separately, giving many of them a doll-like appearance. He has a terrific eye for details that make the scenes pop, like a violet flower in a tangle of green foliage. Then Van Empel, a white Dutch guy, lightens or darkens skin tones to emphasize the kids’ race. He pictures white kids in deciduous forests and black kids in jungles. On the one hand, the scenes are like mini-Edens, pure and holy; on the other, they call forth stereotypes of Aryan princesses and primitive jungle tribes. It’s dangerous, electric territory.

The other photographers featured in the show – Julie Blackmon of Missouri and Jill Greenberg of Los Angeles – aren’t nearly as interesting, but if you want to learn more, please read the rest of my review here. 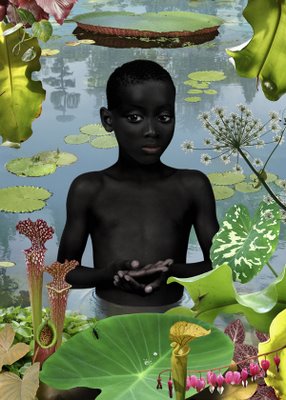