At bottom are some nominations we’ve received so far for the 2008 Boston Art Awards. We are still seeking submissions. The deadline for nominations is this Sunday, Jan. 4. Details about the awards, making nominations and voting are here.

Please post nominations as comments here – which we hope will promote discussion – and vote by e-mail once a ballot of nominees is posted here in early January. (If you’re shy, please send nominations here. Put “Nominations” in the subject line.) And please invite others to do so too.

Below are some nominations we’ve received so far:
(Note: The Journal has not checked to make sure everything here qualifies.)

Update:
Some more nominations have come in:

“In Pursuit of Beauty” at Montserrat 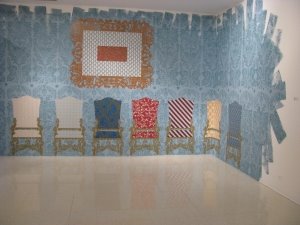 From my review of “In Pursuit of Beauty” at Montserrat College of Art:

The seduction of lush, sexy, decorative pattern is the subject of "In Pursuit of Beauty" at Montserrat College of Art. Curator Leonie Bradbury brings together five international artists whose work is part of a trend that embraces (with feminist undertones) beauty and rejects Modernist hating on decoration. (Other local artists, like Mary O'Malley and Resa Blatman, are coalescing around this style as well.) 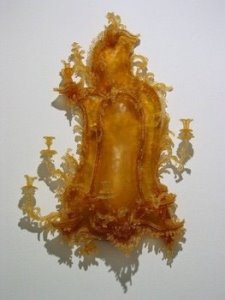 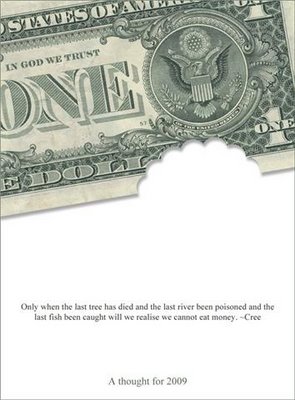 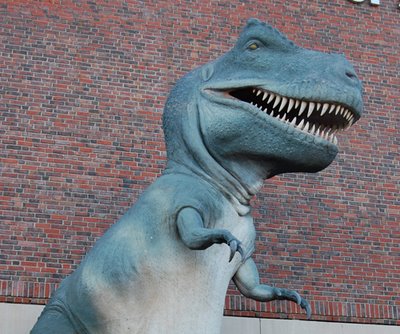 When we talk about public art around Boston, too often we leave out two of the region’s most awesome (and popular) public sculptures: the dinosaurs!

This tyrannosaurus rex model pictured above (and at bottom) stands outside Boston’s Museum of Science. It was sculpted in the 1960s, when only five (incomplete) T-rex skeletons had been discovered. More recent archeological discoveries have prompted scientists to rethink what T-rexes were like, leading to a revised model inside the museum which stalks in a nearly horizontal posture and has skin pattered like tiger stripes. But this old lumbering galoot, now put out to pasture, warms my heart. 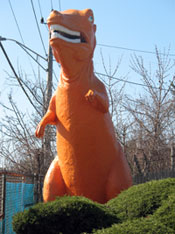 And note its resemblance to the other great dino sculpture around here: the famous 20-foot-tall Orange Dinosaur (pictured at left) at Route 1 Miniature Golf in Saugus, a regional landmark looming over the highway (and hole number six). First erected on the site around 1960, it was felled by vandals last year, but has since been restored to its glory.

While we’re talking about dinosaur sculptures, don’t forget The Dinosaur Place in Montville, Connecticut, a theme park featuring a 14-foot concrete-and-steel tyrannosaurus rex, a 40-foot tall and 75-foot long brachiosaurus, a ceratosaurus threatening a stegosaurus, and a group of velociraptors stalking a protoceratops. The park is offering the “12 Dinosaurs of Christmas” tour from Nov. 28 to Dec. 31. 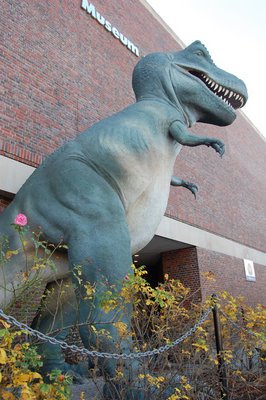 “Boston Does Boston II” at Proof 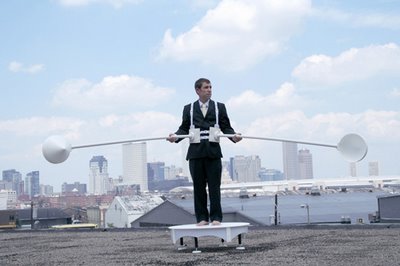 Here are some images from “Boston Does Boston II” at Proof in Boston. The gallery picked five Bostonians, who then chose five other locals to join the show. You can read my review here (about halfway down). 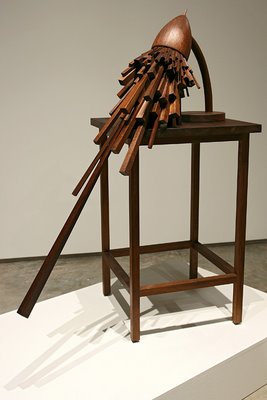 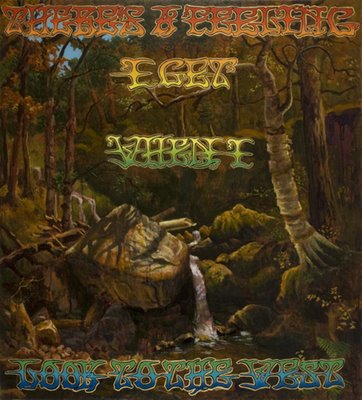 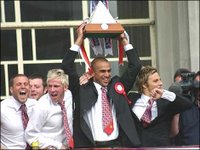 This is a reminder that the deadline for nominations for the 2008 Boston Art Awards is Sunday, Jan. 4.

The aim of the awards, which are organized by The New England Journal of Aesthetic Research, is to promote a more exciting local art scene by honoring the best art made here and exhibits organized here in 2008. And anyone can make nominations, which The Journal will compile into a ballot. Then winners will be chosen by votes of (1) local active art journalists and (2) anyone else who wants to vote – and will be announced in terms of these two categories of voters.

So consider yourself invited to post nominations as comments here – which I hope will promote discussion – and vote by e-mail once a ballot of nominees is posted here in early January. (If you’re shy, please send nominations here. Put “Nominations” in the subject line.) And please invite others to do so too.

More info about the 2008 Boston Art Awards is here.

“The paths through the large number of objects provoked powerful and not altogether pleasant impressions. Features in this landscape included a run-down movie theater, a replica of the ‘spider hole’ where Saddam Hussein was captured, a grim jail, a down-at-the-heels law office, a propaganda van, a tacky mobile church, a voting area, a bank, a looted convenience store, a blown-up police car (the words ‘Pride, Professionalism and Partnership’ still visible on its side), an oil tanker, a beat-up van, an eerie full-size Cape-style house, a watchtower, a torture area, a messy school room with the remnants of an interrupted lesson on the Second Amendment’s right to bear arms, a shooting gallery, piles of transparent garbage bags full of empty pill containers, a sniper position, a children’s carousel featuring large black bombs, and much more. A fair amount of climbing and stooping was necessary to move through, over, and among the objects. To the extent that the assembly of objects was an attempt to say anything about democracy, an impression of decay, hypocrisy, and despair, either now or in the near future, was unavoidable. A striking aspect of the work – at least as it could be perceived in its partial state – seemed to be its invitation to step, so to speak, through the picture frame and encounter the artwork as a three-dimensional world.”

– U.S. District Court Judge Michael A. Posnor in his July 11, 2008, ruling (pdf) for “MassMoCA v. Christoph Buchel.” He was describing Buchel’s “Training Ground for Democracy” installation at MassMoCA, which few people saw because the project was abandoned before it was completed and disassembled, because Buchel and the North Adams museum proved unable to work together, even after the institution spent some $300,000 on the project.